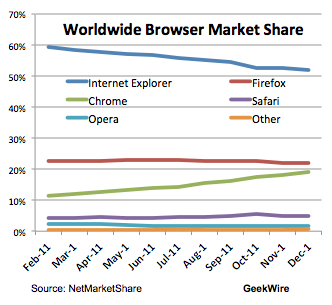 Internet Explorer’s overall market share, which stood at more than 90 percent seven years ago, fell again in December 2011 and appears poised to dip below 50 percent across all computers sometime in 2012, according to the latest NetMarketShare numbers.

However, in its own public observations, Microsoft is continuing its practice of focusing exclusively on the latest version of the browser, Internet Explorer 9, and its progress on Microsoft’s Windows 7 operating system. And in that specific regard, the news is positive, with IE9 approaching IE8 on a worldwide basis on Windows 7 and taking the lead on Windows 7 in the U.S. market.

Roger Capriotti, director of IE marketing, calls it “a great start to 2012” in a blog post published yesterday. A couple of comments on his post question this statement and point out the overall declines — including one commenter who jokes that maybe IE10 market share on Windows 8 is all that should matter.

I’ve asked Capriotti about this issue in the past, and here’s what he had to say.

Here’s what the browser trends look like on Windows 7, via Microsoft … 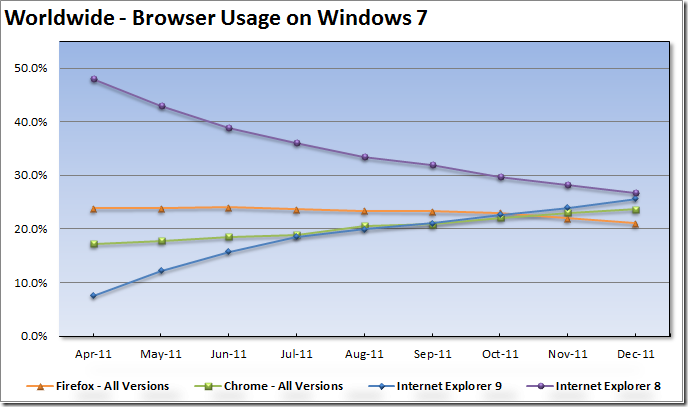