There were some blockbuster deals in 2011, including Electronic Arts’ buyout of PopCap Games and Microsoft’s acquisition of Skype. But the number of M&A transactions and IPOs involving venture-backed companies declined compared to the previous year.

According to Dow Jones VentureSource, corporate acquirers bought 460 companies during 2011, a 13 percent drop in M&A activity.

“Despite a slower acquisition pace capped with an uncharacteristic drop in deal activity in the fourth quarter, there are some positive signs heading into the new year. Acquisitions of companies liquidating their assets were halved in 2011 and companies are benefiting from lower start-up costs by taking capital farther toward a larger acquisition,” said Jessica Canning, global research director for Dow Jones VentureSource.

On the IPO front, 45 venture-backed companies — including Zynga, LinkedIn and Groupon — completed public offerings, raising $5.4 billion. That compared to 46 venture-backed IPOs which raised $3.3 billion in 2010.

In Seattle, online real estate company Zillow was the only venture-backed company to complete an IPO in 2011.

Meanwhile, the National Venture Capital Association and Thomson Reuters released their own study of the IPO and M&A markets in 2011. Even though IPO activity increased during the fourth quarter, NVCA president Mark Heesen noted that there’s still a “considerable way to go on the road to recovery.” Overall, the study saw declines in the numbers of IPOs and M&A deals.

“While we are encouraged by the fourth quarter momentum, we still ended the year with fewer total IPOs than in 2010 and 25 percent of those comprising foreign companies,” said Heesen. “With a full pipeline of companies in registration and pending legislation to ease the IPO path for emerging growth companies, we could see a more robust market in 2012, but only if we can achieve a reasonable degree of global economic stability. The bottom line is that we need at least double the offerings that we saw in 2011 to declare the market back on track, and that could take some time.” 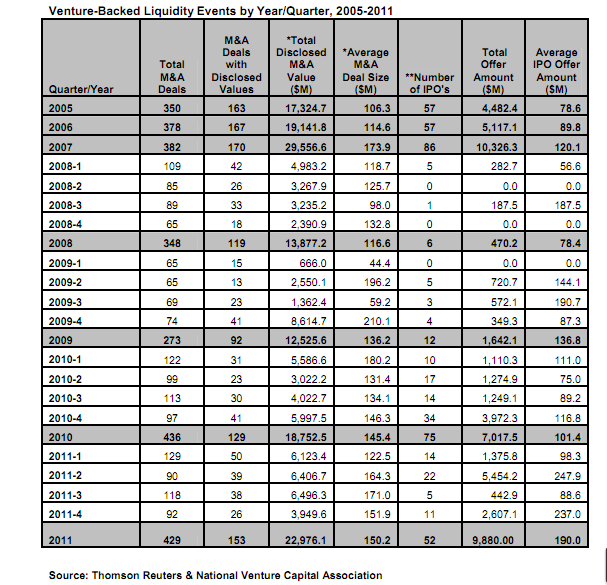