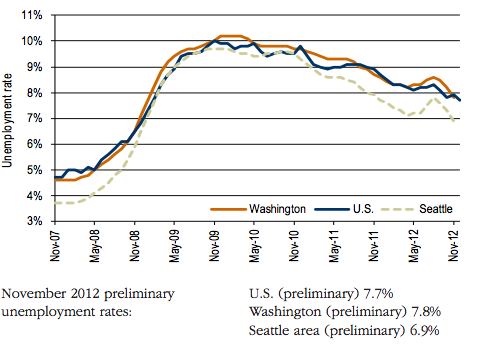 Here’s some holiday cheer for you. Washington’s estimated unemployment rate fell to a seasonally adjusted 7.8 percent in November, landing below 8 percent for the first time since January 2009. 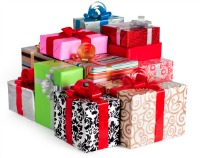 The numbers come as the region’s tech industry continues to fire on all cylinders, with companies such as Amazon, F5 Networks, Concur as well as new entrants from Silicon Valley like Splunk and Facebook, continue to open up offices in the region. Interestingly, the information category, where a number of tech jobs are classified, showed a modest bump up of just 100 jobs during November.

Seattle’s jobless rate took an even bigger nose dive, falling to 6.9 percent, as you can see in the chart above.

Washington’s estimated unemployment rate fell to a seasonally adjusted 7.8 percent in November, landing below 8 percent for the first time since January 2009, according to the state’s Employment Security Department.

The drop from 8.2 percent in October was the largest one-month decline since November 1977.

At the same time, nonfarm employment continued to climb, with an estimated net gain of 1,600 jobs last month, seasonally adjusted.

He noted that average monthly growth from August to November was 5,400. If maintained for a year, it would result in a growth rate of 2.3 percent.

Industries with the most estimated job gains in November were retail trade, which added 2,500 jobs; construction, up 1,400; leisure and hospitality, up 1,200; transportation, warehousing and utilities, up 800; education and health services, up 600; other services, up 600; and manufacturing, up 400.

Industries with job losses last month included professional and business services, down 2,900; financial activities, down 1,300; wholesale trade, down 1,000; and government, down 800 jobs.

Across all sectors, Washington’s seasonally adjusted employment has grown by about 122,000 jobs, out of a recession loss of about 205,000 jobs.

In November, an estimated 270,000 people (seasonally adjusted) in Washington were unemployed and looking for work. That includes 135,985 who claimed unemployment benefits last month.

Also in November, 5,326 unemployed workers ran out of unemployment benefits, bringing the total to 121,273 since extended benefits were activated in July 2008.