It’s harder than ever to get attention for your products. There are so many new ideas being rolled out that you have to spend a lot of time and money making something that is very different. Even then, you’ll easily get lost in the noise if you don’t figure out how to stand out.

One of the reasons that guerrilla marketing has become so popular is because it allows you to compete with international brands that have much deeper pockets. That’s why  startups are constantly trying to create underground marketing campaigns that shock the world, causing waves of attention.

What is guerrilla marketing?

While you can have a viral marketing campaign take off online without any help with offline media, blending the offline guerilla marketing tactics with social media makes it seamless. You see this with couponing on Foursquare or QR readers. Or with offline media like magazine ads recommending you text to watch a movie or get a discount. A guerrilla campaign can get a good bump from a digital push. This allows it to share metrics like CPM/CPC and CPA.

You can’t really beat the return on investment of a successful guerrilla marketing campaign since they deliver at a lower price-point than traditional advertising and marketing efforts. That makes it an even more critical element of marketing when you need to stretch a dollar.

What about ROI on guerrilla campaigns?

If you want to convince clients or investors or whoever holds the advertising purse strings, then you probably are going to have to prove that a guerrilla marketing campaign will pay off. But how do you do that?

Well, if a consumer hears a radio spot, do they really listen, and then tell others? Unless it’s a viral radio spot, no they won’t. In fact, research shows that traditional advertising like radio produces about 66 percent or more waste…meaning less than 40 percent of your campaign is effective.

On the other hand, if you are a grass-covered delivery truck driving down the road, is your audience more likely to notice? You bet.

Still, the ROI calculation is tricky. Other research has shown that while traditional advertising media has an impression recall of 33 percent, guerrilla marketing impressions tend to be near 100 percent. In other words, you are more likely to recall that the grass-covered truck that drove down your street was delivering milk.

That’s a huge chance of the message being shared and going viral. What you have to keep in mind, however, is a guerrilla campaign is intended to make recall better and spread faster, driving down the cost of impression. For example, one marketer calculated that he drove his cost per impression from $450 to $15.

Let’s look at a few examples of guerrilla marketing.

Viral tactics are probably the most popular form of guerrilla marketing. The Cadbury gorilla, the Force commercial by Volkswagen and the Old Spice Man are good examples of viral marketing.

So what’s their secret to success? Well, it’s hard to pin down exactly. However, there are some common elements:

• Free product or service: You can generate buzz simply by giving away your product, or with steep discounts. Virgin Blue tweeted the sale of 1,000 $9 plane tickets, attracting loads of attention.

• Effortless transfer to others: For a campaign to spread, it must be easy to do so. Physical items are tough to share, which is why Internet videos have become one of the biggest tools for spreading ideas.

• Scales easily from small to very large: An idea won’t go viral if it can’t handle a larger audience. For example, when Michael Jackson died, Twitter crashed with all of the tweets. Twitter fixed that problem so that when Steve Jobs died, even though the number of tweets exceeded Michael Jackson’s death, Twitter didn’t crash.

• Exploits common motivations and behaviors: World of Warcraft grew substantially because it bet on people’s desire to invite their friends to play with them. Zynga built a gaming empire based on this concept, too.

Viral marketing isn’t complex. Oatmeal’s 15ish Things Worth Knowing About Coffee is really just an abbreviated summary of the history of coffee…but it exploited our culture of coffee and brought enormous attention to the site.

Sometimes creating a micro site around a tight idea will go viral. The University of Victoria created The Anything Project, a micro site challenging people to answer the question: “If you could do anything, what would you do?”

Speaking of infographics, one of the best is from Unruly, a social advertising company that stood out with its living spiral infographic. It was one of the most passed-along ads ever.

No matter where you live, you more than likely have seen an ambient ad. Taxis and buses are frequently covered from back to front with some sort of advertising. To promote their brand in London, LivingSocial converted taxis into a surprise LivingSocial experience. 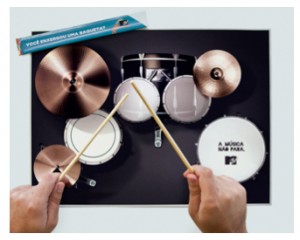 When passengers got into a cab they were forced to make a choice…they could go to their planned destination or roll the dice and take an unexpected trip. The reason it worked so well is it delivers LivingSocials message dead on.

In Brazil, MTV created placemats that looked like a drum set and added chopsticks. While people waited for their food, they played the drums.

One of the reasons that ambient marketing is so powerful is it offers you a means to push your brand message in front of customers that develop better recall with your target audiences.

To fight against human trafficking, Amnesty International stuck a woman in a clear luggage bag and made her spin around the luggage carousel. Photographers and news teams showed up to capture the event, spreading the organizations message across the airwaves for free. 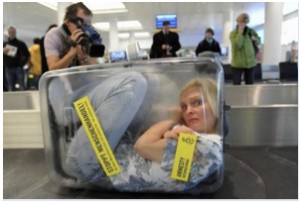 You can also create experiences that don’t fit into your industry. For example, the furniture manufacturer IKEA created a chain of hotels that were decorated entirely with their products.

Apple’s Genius Bar is ambient marketing at it’s best, too. At these bars customers can get free advice by well-trained and friendly staff in cool locations. The Genius Bars even offered appointments to avoid long lines. These bars created a conversation that went beyond the immediate impact on the customer.

Wild postings marketing is nothing more than sticking dozens of posters with your branding message over a building. This is normally done at street level, and can often travel up the wall of the building twenty or thirty feet.

The posters are splattered everywhere, on construction sites barricades, facades and alleyways, and the random pedestrian or driver has no chance in avoiding the campaign.

Shepherd Fairy, the artist behind Obama’s “Change” campaign posters, is probably most famous creator of these marketing message.

When it first launched its iPod, Apple used wild postings in their commercials.

These campaigns typically have a short run, like two weeks, due to the damage that they can take being exposed to the weather.

What are the rules behind a successful wild postings campaign? Here are three: 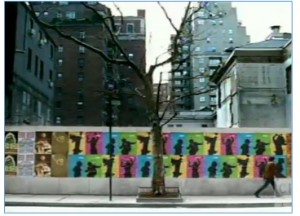 • Creativity: Because people are constantly bombarded by messages everywhere, your campaign should be huge but different. Think of messages that will stop people so they have to read it.

• Give a hint: Successful wild postings sometimes are done where one week you give a clue to something coming up. The following week you replace the posters with the answer and the actual product or service.

• Location: When it comes to wild postings, location is everything. Obviously you need to place your advertisements in places that receive heavy foot traffic. But you also have to try and make your advertisement work with the environment.

As a summary of this article, here are some tips on creating guerrilla marketing that have been gathered from the above examples.

• Experience: All great guerrilla marketing allows people to interact with the product or get exposed to it repeatedly as part of their routine (wild postings, for example). People then become attached to the marketing, taking photos of it and sharing it with others, for example. Let people experience the product and facilitate their talking about their experience publicly.

• Feedback: Depending upon what kind of tactic you use, people will still want to respond. Make sure you listen to questions and complaints, comments and suggestions. You should be prepared to carry on the dialog long after the campaign is over.

• Memorable: It goes without saying that you should create experiences that people will remember for a long time. Don’t rush into guerrilla marketing…take your time and get it right, otherwise you’ll waste time and money.

Guerrilla marketing is not some gimmicky stunt, but rather marketing that has direct and immediate business impact. It’s why large companies like Virgin and Apple use. But it’s low cost makes it a great way for small companies with a small budget to make their dollars go a long way.

What type of success have you had with guerrilla marketing?