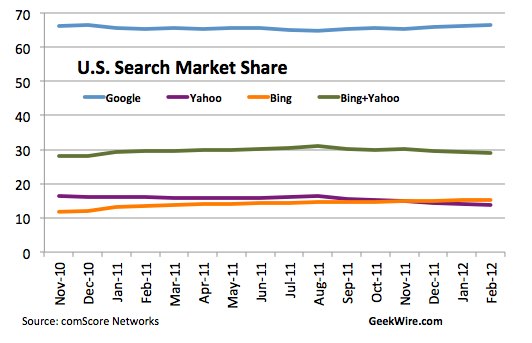 Google got even bigger in the U.S. search market in February — holding the top spot with 66.4 percent of the market and getting close to a new peak, according to new numbers from comScore Networks.

But the bigger story is playing out at the bottom of the charts, where Yahoo continues to slip further behind its search partner, Microsoft Bing, which is now the No. 2 player in the market, at 15.3 percent. Yahoo fell below 14 percent market share in February.

That offset the slight gain by Bing to pull their combined share down slightly, to 29.1 percent. Microsoft handles search and advertising technology for Yahoo under their partnership.

comScore also found that 17.6 billion searches were conducted during the month of February. That was down one percent from January.

Microsoft has been attempting to bolster its Internet search position for years against Google. Last month, it rolled out a new feature called “Linked Pages” that lets users authenticate themselves using their Facebook credentials, and then determine which pages and sites their profiles are linked to in Bing search results.

It is part of an alliance between Facebook and Microsoft. Meanwhile, a report out today indicates that Google pays roughly $1 billion each year to be the default search engine on the iOS and Safari on the desktop.