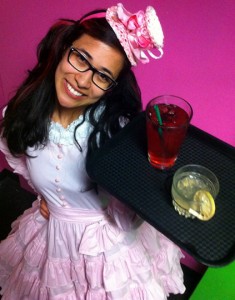 Geeks may like to spend a lot of time indoors, playing games and coding in isolation. But the group behind Seattle’s Pink Gorilla gaming stores have something entirely new in mind. It’s called the Level Up Pixel Pub and Gaming Lounge, and it basically amounts to a gaming paradise.

Oh yeah, on the weekends it will be transformed into a hip night club, but not of your ordinary variety.

“Level Up does not judge. We embrace the art of costuming, and encourage all patrons to visit wearing their own costumes. In fact, this is probably the one place where it would not be outside the norm to see a Stormtrooper buy a beer for Pikachu and then do the Macarena with a wizard and a giant toaster pastry,” according to the company’s promotional Kickstarter video. (See below).

Where will this be located? “A popular Seattle neighborhood! That is all we can say for now until all the paperwork is finalized,” organizers say in their Kickstarter FAQ.

The gaming lounge will feature separate areas for fighting games; music games; and board and card games. It will also feature retro and new titles, with customers able to watch the action on multiple flat-screen TVs.

We’ve seen the rise of geek hangouts in Seattle, including Card Kingdom in Ballard; GameWorks in downtown Seattle and retro pinball halls like Full Tilt.

Here’s a look at Pink Gorilla’s Kickstarter effort, which has already raised more than $6,900 towards a $75,000 goal.

Thanks to Isaac Alexander for the tip.