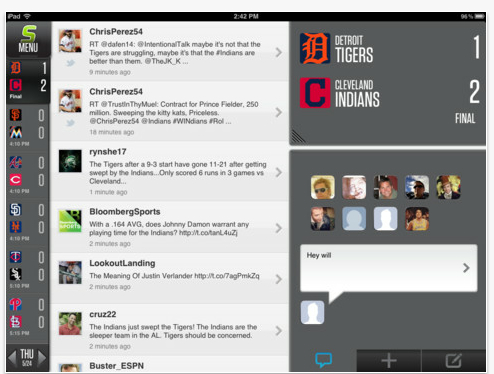 Seattle startup Evri was founded in 2007, designed to help people make better sense of news and information. A lot has changed since then, especially given the rise of tablets and mobile computers.

Now, the company is evolving, announcing today that it has spun off a new social sports startup called SportStream with $3.5 million from Microsoft co-founder Paul Allen. The idea is that sports fans will use the new SportStream app — launching today on the iPad — to keep up with live games, and simultaneously do some trash talking on forums and through social media channels.

“If I watch a game at home, I’m always checking in to see what my friends, other fans, reporters and bloggers are saying and reacting to,” said SportStream co-founder and CEO Will Hunsinger. “With SportStream, we take the best of watching a game with your buddies and combine it with the conversation online.” The new company is based in San Francisco where Hunsinger resides. He remains CEO of Evri, with Hunsinger telling us that he will continue to split his time between the two cities.

Allen’s interest in sports is well known as an owner of the Seattle Seahawks, Portland Trailblazers and a minority owner in the Seattle Sounders.

But the new company is entering a crowded arena — competing with the likes of content distributors like ESPN as well as sports teams themselves which have been creating more immersive experiences.

Here’s more about how SportStream — which is launching on the iPad today — will work:

“SportStream also connects through Facebook to help you quickly find the games your friends are watching and join them. It also identifies the favorite teams and players you’ve ‘liked’ and provides a customized experience by automatically following the games you are most likely to be interested in. SportStream users get the information they crave, as the app shows only relevant social content to the selected game. Users can chat with fellow fans in rooms for each game or easily start Twitter and Facebook conversations specific to each game.