Emerald City Comicon is coming up this weekend, March 30-April 1. This year the event is celebrating its 10th anniversary, and this looks to be the best one yet. To give you a little primer as to what you should expect, here are the Top 5 things we’re looking forward to catching at this year’s shindig.

If all you know about George Takei is that he was Mr. Sulu on Star Trek, then you have some learning to do. First of all, it’s Captain Sulu. He got promoted in the feature films. He also played Kaito Nakamura on the hit TV series Heroes, and has lent his voice to many commercials, animated shows and video games.

Takei is a prolific Facebook user, and if you don’t “Like” his page yet then do so now. He offers up a steady stream of pictures that are sure to bring a smile to your face. And smile is what we’re going to do when we see him in person.

He is scheduled to appear on Saturday and Sunday. 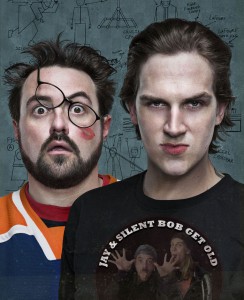 For one thing, he does one helluva funny podcast, and guess what – he’s recording one live at Emerald City Comicon.

Jason Mewes (he’s Jay to Kevin Smith’s Silent Bob) will be joining Smith onstage to share stories about their lives.

Smith’s live taping is for mature audiences and is scheduled for 7 pm Sunday. Tickets for this special event are $40 for general admission, and they’re being sold separately from Emerald City Comicon tickets.

But one celebrity that we’re really excited to see this year is somebody who most people wouldn’t recognize by merely looking at his face.

Billy West has been in high-demand as a voice actor for the last two decades, and has lent his skills to such characters Futurama’s Philip J. Fry, both Ren AND Stimpy, and Elmer Fudd. So listen closely when he talks. You never know who will speak up.

Billy West is scheduled to appear Friday, Saturday, and Sunday.

It wouldn’t be Comicon without legions of fans dressing up like their favorite comic book/movie/video game characters. You’re bound to see Spider-Man, Batman, and probably a zombie or two.

We highly endorse getting into the spirit of the event, and are in awe of the detailed and complex costumes that some people create. If you’ve ever thought about dressing up but have never done it before, we say go for it this year.

With all the cool stuff happening at Comicon it can be easy to forget about the reason for it all: the comics! Make sure to pick up a book or two before you go. The vendors will thank you.

Ken Smith is a Seattle writer, musician, and producer, who once met Batman in a dark downtown alley. Sadly, he didn’t get to meet Robin.