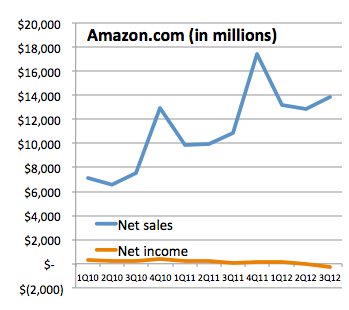 Amazon.com’s third quarter financial results are out and it’s not looking good for the Seattle retailer.

A large chunk of the loss, about $169 million or 37 cents per share, was due to losses experienced by LivingSocial, the daily deals service in which Amazon is an investor. Amazon invested $175 million in the Groupon competitor in December 2010. A 2011 filing showed $558 million in losses for LivingSocial.

Amazon’s stock is down five percent in after hours trading. The company posted profits in the three previous quarters.

CFO Tom Szkutak spoke on a conference call shortly after the earnings were released and said the losses can be attributed to investments in new geographical locations, new fulfillment centers and the Kindle business.

“We like the idea of selling our Kindle Fire and then being rewarded through purchases of content going forward,” Szkutak said.

In July, Amazon reported earnings per share of one cent for the second quarter.

In Amazon’s release, the company compared its Kindle Fire HD to the iPad mini, a new chapter in the rivalry between the two giants. Amazon noted that users can watch HD movies and TV on the Kindle —not possible on the iPad — and toted better audio, more pixels and a lower cost.

CEO Jeff Bezos tried to put a positive spin on the results in his statement.

“Our approach is to work hard to charge less. Sell devices near breakeven and you can pack a lot of sophisticated hardware into a very low price point,” Bezos said in the release. “And our approach is working – the $199 Kindle Fire HD is the #1 bestselling product across Amazon worldwide. Incredibly, this is true even as measured by unit sales. The next two bestselling products worldwide are our Kindle Paperwhite and our $69 Kindle. We’re selling more of each of these devices than the #4 bestselling product, book three of the Fifty Shades of Grey series. And we haven’t even started shipping our best tablet – the $299 Kindle Fire HD 8.9” ships November 20.”