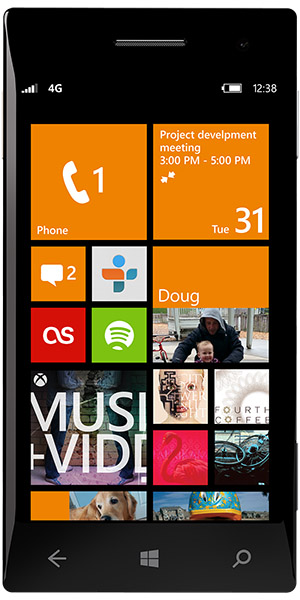 The best comments, quotes, and random zingers we heard this week…

“I think it’s interesting the types of adjectives journalists use to “spin” articles. For example in this article, Kindle’s market share of 5% is described as “a relatively modest slice of the overall market.” But in the yesterday’s post on Windows Phone, you decry the 3.8% market share as “dismal.” I don’t think any Fortune 500 company would be satisfied with a market share of around 5% but why the kid gloves with Amazon?”—A GeekWire reader responding to numbers released by research firm IDC.

“Appreciate the comment. The difference is that Amazon has been in the tablet market for less than a year, and Microsoft has been in the mobile phone OS business for more than a decade.”—GeekWire co-founder Todd Bishop responds to the criticism.

“We’ve been doing our own bit of hard core training here at Microsoft, and our engineers across the company have been setting a blistering pace.”—Microsoft PR chief Frank Shaw commenting on the software giant’s recent activity, including the unveiling of the Surface; the acquisition of Yammer; and the rebranding of Hotmail.

“Microsoft’s challenges are simple. They put a computer on every desk and in every home but forgot to put one in everyone’s hand.”—Box CEO Aaron Levie in a Tweet, describing the challenges at Microsoft.

“We believe there is a really big opportunity to see and understand data, and that’s it. It is that simple. In fact, we think making it easy for people to see and understand data — like the kind of data that is in spreadsheets and databases and files — we believe that is a unsolved problem in modern computer science, much like Web search was before the advent of Google.”—Tableau Software CEO Christian Chabot at an open house at the company’s headquarters in Seattle’s Fremont neighborhood. With sales bookings of $58 million during the first half of the year, Tableau has been discussed as a possible IPO candidate.

“Looks like Apple just sold the Surface to end users :)” —A GeekWire reader responding to a patent application by Apple that includes a smart cover that could double as a keyboard, raising comparisons to Microsoft’s upcoming Surface tablet computer.

“This is right for so many reasons. We’re in for $2.5 million.”—Amazon.com founder Jeff Bezos in an email to Jennifer Cast, a former Amazon employee who is now spearheading fundraising efforts to support same-sex marriage in Washington state. The donation by Jeff and MacKenzie Bezos is believed to be one of the largest individual gifts to support same-sex marriage in the U.S.

“We also have made the difficult decision to right-size the company to align our resources with our future direction. This action requires us to scale back our employment in various areas that are not aligned with our platform strategy.”—Intelius founder Naveen Jain discussing the company’s recent layoffs in a memo to staff of the Bellevue Internet company.

“If it is raining, I can do it in the car. Or, if I am late for a meeting, I can do it while I am walking.” —PayByPhone’s Chris Morisawa describing the company’s new mobile parking payment technology, which will arrive at City of Seattle parking spots this fall.