Would you ever think that a comedian could hold the key to unlocking the secret to making a lot of money online? Believe it, because that’s exactly what Louis CK did in early December.

But he didn’t just make a little money. He made a lot in a short period of time… $1 million dollars in eight days.

Comedian Louis CK has proved a point: People are willing to pay a reasonable amount of money for DRM-free content from a performer they love, even though it would be trivial for them to pirate the same content for free.

Twelve days ago, Louis CK decided to skip the distribution, DRM, ads and everything else that goes into marketing and sale of a video, and simply offer the video of his latest performance on his website for $5.

So how did he do it? And what can you learn from his approach?

One thing that I find interesting is the questions that Louie hoped his test would answer. It’s not so much the content of the questions, but that he asks them at all.

Any good test is run to prove or disprove something. It’s called a theory and those theories are basically the questions you want the test to answer.

For example, here are the questions Louie was asking:

I’ll answer those questions in a few minutes, so keep reading…

The product that Louie eventually sold on his website was a video of never-before seen footage he recorded with six cameras during a live show at the Beacon Theater, an upscale venue in Manhattan.

The total cost to record the footage was $170,000. This doesn’t include Louie’s time, which he invested in by directing the show, then editing the footage for countless hours up to the launch.

Louie also invested $32,000 into the development of his website.

One thing that is immediately noticeable is that the “buy” button is at the top and obvious.

What else is there for you to do but “buy the thing?”

Testing is so important when it comes to making a website. I don’t know if Louie tested different wording like “Buy the video” or “Buy it now.” Once they felt the site was ready and the video was ready they launched.

But for you site it’s worth testing, as Optimizely did in a test they ran on their site and during Obama’s campaign which both proved the power of one word on conversions. 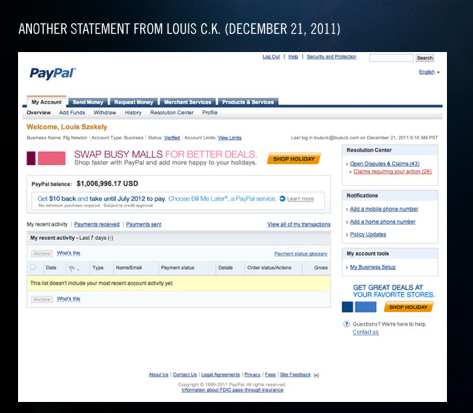 Louis and his team released the video on noon December 12th. They were selling it for $5, allowing people to pay for it through PayPal and download it immediately.

There were no restrictions, meaning people could do with it what they wanted. They could watch it anywhere in the world, copy it and share it without fear of getting in legal trouble…

Twelve hours later Louie reported that over 50,000 people had purchased the video.  If you do the math, you know that he made over $250,000, which is enough to cover his expenses.

Not bad for 12 hours of sales. But things got a whole lot better.

Four days later Louis had made over $500,000, pocketing $250,000 in profit. Then that number doubled in the next eight days, bringing Louie to the magic number: $1 million dollars.

In his latest blog posting, Louie talks about how much he’s enjoyed the success of the experiment and how much he’s really enjoyed seeing people get involved and interested in it.

He likes making the money, but what he really seems to enjoy is the interaction with his audience. This is not surprising for a comedian who generally depends on intimacy with the audience to make his or her show work.

The success has given Louis the idea to continue by selling just about anything on the site, including CDs, videos and tickets to shows. If it works for videos, what about other products? Smells like another test to me.

My guess is that he’ll also continue to tinker with the current site, improving the call to action.

This is not a new approach

Louis CK may be the first comedian to use this approach, but he’s not the first person.

In 2007, the band Radiohead offered it’s album In Rainbows to fans for whatever they could afford. It was sold on their website. There were ten songs, but unfortunately the experiment didn’t work out too well.

According to some sources, about a third of the downloads paid the lowest premium price…one penny. It was the pre-release sales that proved more profitable.

It’s revealing that Radiohead has never repeated this process.

Following Radiohead’s lead, another band, this time Nine Inch Nails tried the same experiment, but with some notable differences.

They offered other options to get the music, like a 2-CD boxed set for $10 or a deluxe limited edition for $70, but one truly remarkable move was to uploaded the partial album to BitTorrent themselves. Here’s what they said about that move:

“Now that we’re no longer constrained by a record label, we’ve decided to personally upload Ghosts I, the first of the four volumes, to various torrent sites, because we believe BitTorrent is a revolutionary digital distribution method, and we believe in finding ways to utilize new technologies instead of fighting them.”

They even offered it under a Creative Commons license that allowed anyone to share or remix it.

How did this approach work?

Bypassing the middle man and offering the album for free, the band managed to make $750,000 on sales from the different collections they offered. Their approach generated enough interest that at one point their servers were knocked offline.

This worked because the strategy was different than Radiohead’s in a number of ways:

Let’s finish this article by going back to Louis CK and see if his experiment answered the questions he asked.  Remember, he wondered:

Yes, to the first question. In Louis’ next experiment he might test to see if he could lower or raise the price point and see what kind of impact that would have on sales. He should do it on a smaller scale, however, or try it with a minimum viable product.

Some people did steal the video. But not very many…at least not enough to concern Louis.

Obviously over a 200,000 people paid for it. People will continue to buy even if there isn’t a middle man.

I think one of the reasons the video did so well was the ease of buying and downloading it.

And finally, his test showed that a person could become a millionaire by selling this way. Louis doesn’t want to be a millionaire, however…he says he’ll be splitting that money four ways, with a fourth of the profits going to him.

What other lessons do you think we can learn from Louis CK’s online experiment?