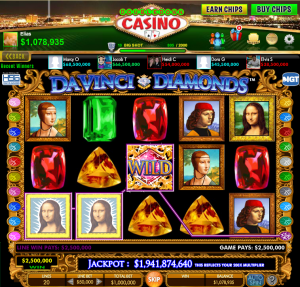 International Game Technologies — which purchased Seattle social game maker Double Down Interactive for up to $500 million in January — is bringing its popular Da Vinci Diamonds slot machine to Facebook.

But this won’t be the full Vegas experience. After all, in the Facebook version, only virtual coins are at stake (for now). The game will be available for play in DoubleDown Casino, the fourth most popular game on Facebook. It also marks the first time that IGT has taken one of its existing slot machines, and made it available on a social networking site.

“The game’s visual appeal, with features that allow for extended play and free spin bonuses, as well as the impressive 20-payline configuration, made it a prime candidate for DoubleDown Casino’s catalog of virtual titles,” said Robert Melendres, IGT executive vice president of emerging businesses.

IGT isn’t the only company expanding in the world of virtual casino games. PopCap, acquired last year by EA for as much as $1.3 billion, recently rolled out its line-up Lucky Gem Casino games.

The roll-out of the game marks yet another example of the physical and digital worlds colliding, a trend we’ve been closely tracking with other examples such as Amazon Lockers, Postagram, Starbucks’ free iPhone app promotion and other services.

Earlier this week, Double Down CEO Greg Enell was named one of Ernst & Young’s Entrepreneurs of the Year for the Pacific Northwest region. The company continues to grow fast, with just over 100 employees, and 40 open positions, many of them in mobile development.

Previously on GeekWire: Real gambling on Facebook? Double Down CEO says IGT deal could help make it a reality