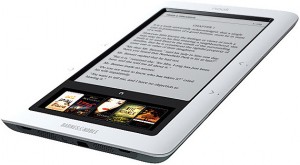 Barnes & Noble today jumped into the complex legal battle over the future of electronic book publishing, raising objections to a proposed settlement set forth by the Department of Justice related to alleged price fixing by Apple and several major book publishers.

Barnes & Noble — taking a similar stance to Apple — said that the DOJ settlement “warrants an exacting review because of its potential impact on the national economy and culture, including the future of copyrighted expression and bookselling in general.”

The DOJ sued Apple and several large U.S. book publishers in April, alleging that they worked to raise e-book prices in an effort to curb Amazon.com’s growing power. HarperCollins, Simon & Schuster and Hachette settled with the DOJ, but Apple, Penguin and Macmillan have vowed to fight the case.

In today’s legal brief, Barnes & Noble detailed how the so-called “agency” contracts established by Apple and major book publishers helped create a legal counterweight to Amazon’s dominance in electronic book sales. The DOJ has proposed wiping out the agency model as part of the settlement, potentially bolstering Amazon’s position.

The end loser of this unnecessary and burdensome regulatory approach will be the American public, who will experience higher overall average e-book and hardback prices and  less choice, both in how to obtain books and in what books are available. Barnes & Noble has witnessed how agency contracts have created competition by making publishers—where there are many players and where competition is abundant—responsible for pricing and price competition.

In just two years, the result of agency contracts has been significant, as competition at all levels of the e-book distribution chain has increased. Amazon, which formerly sold 90 percent of e-books, still is responsible for approximately 60 percent of e-book sales; however, as a result of the adoption of the agency model, Barnes & Noble, Apple, independent booksellers, and others have been able to establish presences and begin to compete effectively for e-book  sales.

The fact is that agency has resulted in lower e-book prices, lower hardback prices,  substantially lower wholesale e-book prices, and increased the quality and availability of ebooks.

That’s similar to the argument that Apple made last month in which it referred to Amazon.com’s monopolistic hold on e-books. Apple wrote:

The Government sides with monopoly, rather than competition, in bringing this case. The Government starts from the false premise that an eBooks “market” was characterized by “robust price competition” prior to Apple’s entry. This ignores a simple and incontrovertible fact: before 2010, there was no real competition, there was only Amazon. At the time Apple entered the market, Amazon sold nearly nine out of every ten eBooks, and its power over price and product selection was nearly absolute. Apple’s entry spurred tremendous growth in eBook titles, range and variety of offerings, sales, and improved quality of the eBook reading experience.

In comments today with PaidContent, Barnes & Noble General Counsel Gene DeFelice said that the DOJ’s proposed settlement would bolster Amazon even more. “You’re going to end up having choice control from a server farm in Washington state,” DeFilice told PaidContent.