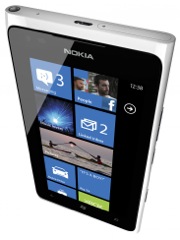 Nokia just can’t seem to get out of the rut. The one-time mobile phone giant from Finland continues to see its market share slip, with a new Gartner study out today indicating that its smartphone ranking fell from third to seventh place during the third quarter.

Led by former Microsoft executive Stephen Elop, Nokia is a key partner with the software giant in the mobile market.

But the companies have struggled to gain any footing against Apple and Android. And that was proved out in the numbers released today.

Here’s what the report had to say about Nokia:

Nokia’s mobile phone sales declined 21.9 percent in the third quarter of 2012, but overall sales at 82.3 million were better than Gartner’s early estimate, largely driven by increased sales of the Asha full touch range. Nokia had a particularly bad quarter with smartphone sales, and it tumbled to the No. 7 worldwide position with 7.2 million smartphones sold in the third quarter. The arrival of the new Lumia devices on Windows 8 should help to halt the decline in share in the fourth quarter of 2012, although it won’t be until 2013 to see a significant improvement in Nokia’s position.

Meanwhile, the report found that overall smartphone sales increased by 46.9 percent during the third quarter, largely dominated by Samsung and Apple. Together, they controlled 46.5 percent of the worldwide market, led by Samsung’s share at 32 percent.

RIM was the third biggest seller of smartphones, followed by HTC. Gartner predicted a lower boost than normal this holiday season in smartphone sales, writing that “consumers are either cautious with their spending or finding new gadgets like tablets, as more attractive presents.”

Here’s a look at overall mobile phone sales in the third quarter. Nokia remains in second place, but its fall in the more lucrative smartphone market has raised concerns. 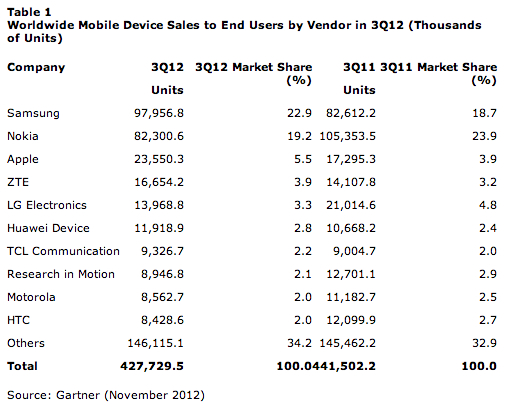