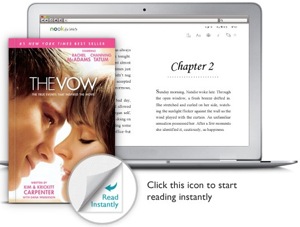 Today, Barnes & Noble announced the Nook for Web, giving users access to B&N’s Nook store via any PC or Mac.

The free access means users can browse titles and start reading without downloading software or signing up for an account.  The book seller said that additional Nook browsing capabilities will be coming this fall for tablets, smartphones and other mobile devices.

In addition to the free Nook for Web news today, CNET reports that B&N is unveiling the next-gen e-reader this fall, a “7-inch model that features ‘revolutionary screen technology.” All eyes are on the potential changes to B&N’s e-reader since Microsoft announced that it was investing $300 million in B&N’s Nook business unit. CNET went on to speculate how Microsoft’s involvement with the Nook might play out: “It’s quite possible that the new Nook Tablet will have a Microsoft tie-in, perhaps even an Xbox Live option for movies and music,” though that hasn’t been confirmed.

Regardless, the 7-inch Nook will still have to compete in the heating up Tablet Wars: In addition to taking on Amazon’s Kindle and Apple’s iPad, both with size changes reportedly coming soon, there’s also new competitor Google’s Nexus 7, and Microsoft’s Surface about to join the fray.

If you’d like to check out the Nook for Web’s capabilities, you can try out six bestsellers for free until July 26. Users can download Map of Bones by James Rollins, The Vow by Kim Carpenter, The Boxcar Children Summer Special by Gertrude Chandler Warner, Brave by Tennant Redbank, Perfect Island Getaways by Patricia Schultz, or wait for it, Sex and the City by Candace Bushnell.

This is all well and good news for the Nook, but does anyone else feel like the Nook is the Lando Calrissian to the iPad’s Han and the Kindle’s Luke? He can drive the Falcoln and figure out what Chewbacca is saying, but will never be the star player in the game?