We’ve watched a lot of Kickstarter videos in recent months. But nothing — at least in our experience — compares to the wonderfully hilarious pitch from Seattle game company Subutai Corporation which is attempting to craft the most realistic sword fighting game on the planet.

The pitch begins with science fiction author and Subutai chairman Neal Stephenson smoking a pipe in a den discussing the origins of the idea:

“I’ve been writing science and historical fiction for three decades,” notes Stephenson. “Well, screw that. I want to do a video game — a video game about something really cool and fun that I enjoy: sword fighting.”

The pitch gets funnier and wackier from there, including a tour of the company’s top secret sword lab; a few jabs at Zynga and Stephenson tossing of a traditional game controller in a trash can. And by the way, isn’t that a cameo by Valve Software CEO Gabe Newell — one of Subutai’s high-profile angel investors — in minute three?

“They’re dangerous as hell, but without them, you are just making a bogus piece of crap,” notes Stephenson at one point during the video. He later remarks that Subatai is creating “Guitar Hero with swords.”

One does have to ask why the company needs to turn to the crowdfunding platform in the first place. After all, in addition to Newell, the company’s list of financial backers includes Bezos Expeditions — the venture capital firm of Amazon.com founder Jeff Bezos — and Kennedy/Marshall Company — the movie production company behind films such as The Curious Case of Benjamin Button; The Sixth Sense; and Seabiscuit. 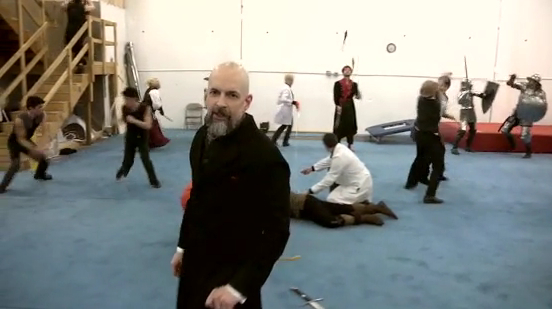 Stephenson addresses that in the second video.

“Sure, it would be great to raise tens of millions of dollars and make a huge, triple A open-world game, but there’s a price you pay for taking lots of funding up front, and that price is loss of creative control,” said Stephenson, admitting that since he’s “nerd famous” he can become a talking head to bring in additional cash. “My goal is to use that money to hire people that can run it, so I can get back to my primary function in today’s global economy, which is sitting on my butt, making things up and cashing checks.”

Subutai plans to use of an off-the-shelf controller that’s already on the market in order to make sword fighting come to life.

“It’s time to step back, dump the tired conventions that have grown up around trigger-based sword games, and build something that will enable players to inhabit the mind, body, and world of a real swordfighter,” the company writes in the Kickstarter description.

Described as a PC arena game, the company plans to draw on the talents of Stephenson and other sci-fi writers (Greg Bear also is an advisor) to create an immersive new game experience. (Some of the writings that will be featured in the game are already being published by 47 North, Amazon.com’s sci-fi publishing house).

Subutai’s game development is being led by Karen Laur, a former lead artist on Valve’s Half-Life who most recently worked for Forterra Systems.

Without further ado, here’s the video. What do you think? One of the best you’ve seen?

And, in case you need more Stephenson, here’s an explanation by the author explaining why people love combat games and geeking out on why swordfighting games need an upgrade.