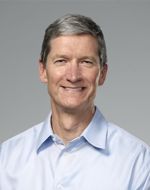 Update, Monday morning: Apple plans dividend, buyback — will pay out $45B over 3 years

What’s Apple going to do with all of its cash? That’s been an interesting question for those who closely follow the tech industry, and it looks like an answer may be coming tomorrow morning. The company issued a press release today saying that it plans to host a conference call Monday morning at 6 a.m. to “announce the outcome of the Company’s discussions concerning its cash balance.”

Apple has been weighing the possibility of issuing a cash dividend to shareholders, something it has not done since 1995. It certainly has the cash reserves to pay out some to investors.

The iPad and iPhone maker is currently sitting on $97 billion in cash and investments — more than Google and Microsoft combined. (See chart below) CEO Tim Cook has publicly discussed the possibilities of distributing and/or using some of the cash.

“I am not religious about holding it, or not holding it,” said Cook in a conference call last month.

But he did add that Apple will not curtail its frugal ways in which it treats cash “like it is our last penny.”

“We are not going to throw a toga party here,” he said.

Previously on GeekWire: Charts: Apple has more cash than Google and Microsoft combined 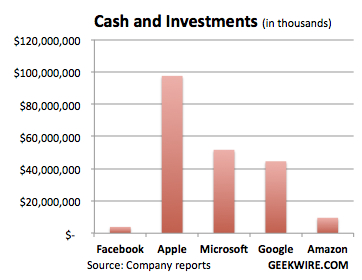