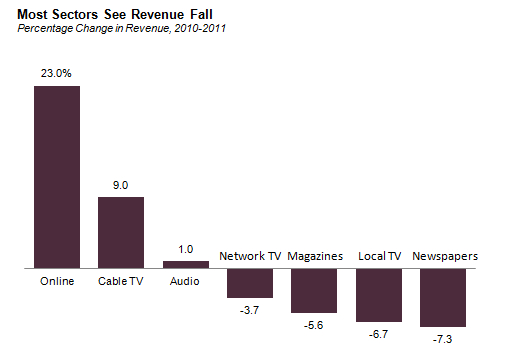 Americans are spending more time consuming news, using devices such as smartphones and tablets to track events on the go. But even as news consumption rises, the traditional media companies that have produced the news aren’t necessarily benefitting.

The 2012 State of the News Media report from the Pew Research Center’s Project for Excellence in Journalism found that five technology companies — Google, Microsoft, Yahoo, AOL and Facebook — now account for 68 percent of all online ad revenue.

The report notes that these technology “intermediaries” are increasingly controlling the future of news.

Two trends in the last year overlap and reinforce the sense that the gap between the news and technology industries is widening. First, the explosion of new mobile platforms and social media channels represents another layer of technology with which news organizations must keep pace.

Second, in the last year a small number of technology giants began rapidly moving to consolidate their power by becoming makers of “everything” in our digital lives. Google, Amazon, Facebook, Apple and a few others are maneuvering to make the hardware people use, the operating systems that run those devices, the browsers on which people navigate, the e-mail services on which they communicate, the social networks on which they share and the web platforms on which they shop and play. And all of this will provide these companies with detailed personal data about each consumer. 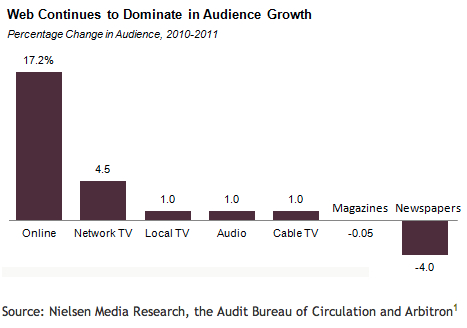 Given the changing dynamics, the authors speculate that some of the technology giants may consider buying legacy media properties such as magazines or newspapers in order to strengthen their content offerings.

As the chart above suggests, newspapers are taking it on the chin. Print circulation continues to fall, and the advertisers continue to flee, causing a downward spiral in newspaper revenue.

Consider this factoid from the report: “Losses in print advertising dollars outpaced gains in digital revenue by a factor of roughly 10 to 1.”

In total, the report said that newspaper industry (circulation and ad revenues) has fallen by 43 percent since 2000.

“In sum, the news industry is not much closer to a new revenue model than a year earlier and has lost more ground to rivals in the technology industry. But growing evidence also suggests that news is becoming a more important and pervasive part of people’s lives. That, in the end, could prove a saving factor for the future of journalism.”