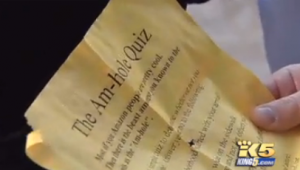 Perhaps no Seattle neighborhood has undergone as radical a transformation in such as short period as South Lake Union.  And that transformation is largely being driven by the arrival of Amazon.com, which moved its headquarters from the lonely streets of Beacon Hill to the middle of the city last year.

But — as can be imagined — not everyone likes the arrival of some of the techies at Amazon.com. King 5 reports that yellow flyers began appearing on light poles, pointing out the annoying behavior of some workers at the tech giant. On the flyers, individuals are asked to take the “Am-hole Quiz,” a six-question quiz with questions like:

5. Do you not realize that you are working for an updated version of Sears and Roebuck so you should check yourself?

6.  Do you believe for a second that you are not an expandable cog in the corporate Amazon machine?

The flyer goes on to say: “Answer yes to any of the above? Boom! You are an Am-hole!”

Amazon.com has about two million square feet of space in the neighborhood, and has been growing like a weed as it takes over buildings in nearby areas. The company recently topped 50,000 employees, adding a whopping 8,000 alone during the third quarter.  Amazon.com does not disclose the size of its workforce in Seattle.

Here’s the report from King 5, which notes that the blue collar neighborhood has been overrun by geeks with “blue badges.”