I was a huge fan of the news aggregation service Summify, and was bummed when the Vancouver, B.C. was shut down this past summer after being sold to Twitter.

In other words, they are looking to solve a very big problem that many of us deal with every day: information overload.

Goldfinch essentially watches your personal social media streams, and then “bubbles up” the very best links of the day.

“Twitter and Facebook do a great job and displaying content as it happens,” Gregov tells GeekWire. “The problem of course, if you’re not reading your social streams exactly as content is shared, you’ll miss it. Goldfinch let’s you, in effect, catch up with what are the most significant stories of the day.”

Gregov said they are not trying to replace Twitter or Facebook feeds, but simply providing a quick overview of the day’s happenings.

The idea for Goldfinch, launching today as a $3.99 mobile app for iOS, started three years ago when Cottrell and Gregov started talking about ways to rank the content coming from their RSS feeds. 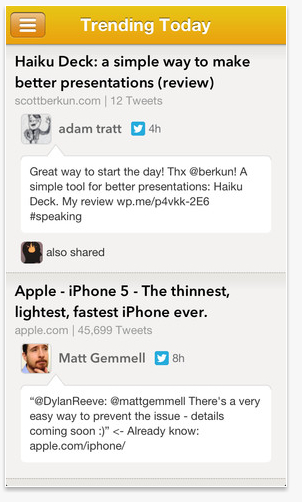 Unlike Summify, Goldfinch is launching only as a mobile app, bypassing the email digests that the news service sent out regularly. (Gregov tells us they may consider an email version in the future).

One other key differentiator is that Goldfinch is a “real-time app,” meaning that they display top stories in a matter of seconds.

“With Summify you had to wait for your summaries to be delivered at certain times per day after processing,” he said. “In addition, we also let users scan through their whole story feed for the day, not possible with Summify.”

Other apps in the news summary space include News.me, Prismatic and Bottlenose. And while Gregov says each has an interesting twist, none of them do a great job of showing the best news links from one’s social network in his view.

We’re not venture backed. We aren’t trying to become the next big thing in news,” says Gregov. “We’re focused on a simple problem, surfacing the best from people’s social streams. We do that really well. If that’s a relatively small market, that’s fine. Our business model let’s us focus on building tightly focused apps.”

Cottrell and Gregov both worked at Amazon.com for more than 10 years, building some of the early recommendation technologies alongside Josh Peterson of Robot Co-op; Buster Benson (now at Twitter) and Greg Linden (featured in GeekWire earlier this month). Gregov and Cottrell later moved to IMDb where, among other things, they built the iOS version of the popular movie directory.

I asked them how that shaped what they are building at Goldfinch. After all, Amazon.com is very much known as a leader in recommendation technologies.

Here’s what Gregov had to say about the Amazon experience, which shaped how they build apps at the new parent company of Goldfinch, which is known as Sliding Autonomy.

“You always start with the customer first at Amazon and work backward from there. Our approach was no different with Goldfinch. We wanted an app that could identify the best content of the day in seconds. Everything from the backend infrastructure to the actual iOS app UI was focused at getting content to users in seconds and allowing them to get through it as quickly as possible.

When you use Goldfinch, it seems pretty simple. It just shows you great stories from people and sources you trust. But there is some non-trivial technology we needed to build in order to analyze hundreds, in some case thousands of shared items, in real-time. We hide all that complexity for users just as we did building product recommendations for the Amazon website and making one of the fastest mobile apps for IMDb.

Working with big data and building extremely performant mobile apps are the two big skills we took away from Amazon and hope to continue to build upon that skill set at Sliding Autonomy.