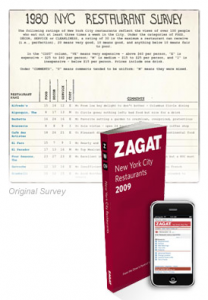 Zagat corned the market on restaurant ratings in the 1980s and early 1990s, tapping the power of user-generated content before that term had even entered the popular lexicon. But then, the Internet came along, and review sites such as Yelp took over. Zagat is trying to get back in the online game, and that’s part of the reason why a content partnership with Seattle’s Urbanspoon that was announced this week is significant.

As part of the deal, more than 25,000 Zagat reviews will appear on the pages of Urbanspoon. I asked Urbanspoon’s newly-appointed marketing director, Conrad Saam, whether having Zagat on the site would be competitive with the company’s own rankings. He didn’t think so, noting that Urbanspoon has long featured reviews from sites like The New York Times, Seattle Weekly and The Seattle Times.

Urbanspoon’s mobile application remains a superstar, recording more than 20 million downloads to date. It also recently topped more than one billion shakes — a reference to the slot machine-style restaurant selection process in which new restaurants appear when the user shakes the device.

Now a division of CityGrid Media, following its purchase in 2009 by IAC, Urbanspoon has been rolling out new features and partnerships in an effort to bolster its presence in the online restaurant review space. Zagat has its own connections to the Seattle area, with former Microsoft Chief Technology Officer (and absolute foodie) Nathan Myhrvold participating in the company’s $31 million venture capital round in 2000.

There’s been a decent amount of activity in the online restaurant review arena as of late. Just yesterday, we reported on the financing round of Viableware, a company that’s introducing a new touchscreen “self swiping” credit card device for restaurants. We also just featured Chewsy, a Seattle startup that focuses on reviews of specific dishes at restaurants.

Here’s a look at how the Zagat reviews are appearing on the Urbanspoon site for the restaurant Boom Noodle. 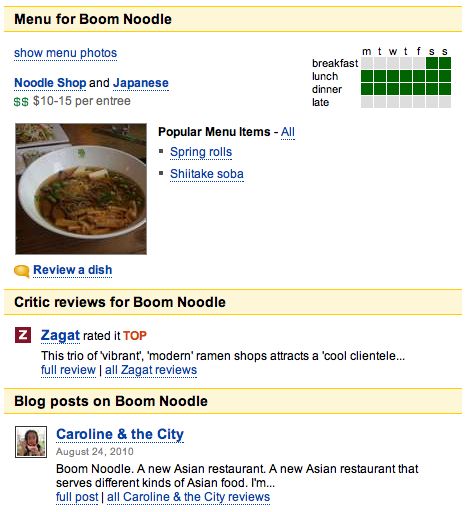