I usually don’t think of mobile software — or Tweets for that matter — as art. But, then again, the definition of modern art often eludes me. Nonetheless, a new interactive exhibit at the Museum of Modern Art in New York called Talk to Me: Design and the Communication between People and Objects will certainly spark interest from all kinds of geeks.

Running from July 24 to November 7, the exhibit “investigates the communication between people and objects through design.”

Among the technologies featured in the exhibit is Swype, the 8-year-old mobile text–input technology developed by Seattle’s Cliff Kushler and Randy Marsden.

Swype is best known to Android phone users for its keyboard technology which allows messages to be quickly input with a swipe of a finger rather than the traditional tap.

What’s the exhibit all about?

“With nearly 200 projects ranging from the microscopic to the cosmic and all designed in the past few years or currently under development, the exhibition explores design’s new terrain: enhancing communicative possibilities, embodying a new balance between technology and people, and bringing technological breakthroughs to an approachable, human scale.”

In addition to Swype, projects center around charts, video games, Web sites and more. Some of the exhibits sound a bit weird, but, then again, this is modern art, so what do you expect?

Consider these other exhibits as described by the museum:

–Greeting visitors at the entrance to the exhibition is Yann Le Coroller’s Talking Carl (2010), an iPhone and iPad app in which a box-shaped creature responds to sound and touch, gets ticklish and jumpy, and repeats what visitors say in a high-pitched voice. 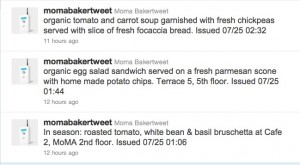 –A device called a BakerTweet (2009) by the design firm Poke is installed in the Museum’s Cafe 2, and staff will use it to announce by Twitter the moment when something delicious pops out of the oven, or the lunch specials of the day. The feed is displayed on a screen in the exhibition and also seen by followers of @MoMABakerTweet on Twitter on their own devices.”

“EyeWriter (2009) … is an interface that enables a paralyzed graffiti artist to tag buildings with his eyes using a remote control laser. It demonstrates that necessity and emergency can give rise not simply to particular solutions for extreme individual cases but also to breakthroughs for society at large.”