Now, admittedly, I’m getting to write this guest post because I lost a bet. But let’s not let that muddy the waters. I get to write a post, on GeekWire, about Seattle’s awesomeness. And that’s nothing to be taken lightly.

But instead of just talking about Seattle, I thought I’d actually try to do something constructive. Like explore some ways that both the Portland and Seattle startup scenes could be even better by encouraging more collaboration between our two towns — besides just betting on soccer matches.

So here we are. We’ve got this amazing Seattle chocolate and this interesting Portland peanut butter. Different bases of talent. Different types of experience. Portland’s a little bit open source; Seattle’s a little bit corporate. How do we get the two of those mixing more often?

Well, I’ve got a few suggestions. And I’d like to hear yours.

Give us more random excuses to get together: Today, I’m heading up to Seattle for the second time in as many weeks all because of something terribly simple. A barbecue. Why don’t we do more of this kind of thing? We should be throwing events like Startup BBQ on a regular basis. Events that are just compelling enough to get Seattle folks to come south or Portland folks to come north. Heck, we might even rope Centralia into this whole thing.

Give us more formal excuses to get together: Both Portland and Seattle have strong event schedules. Heck, just taking a gander at Calagator gives you an idea of what’s happening in the Portland area on a daily basis. And Seattle is not different. But summer brings a whole new level of event to both of our cities. And we should be taking advantage of that. Gnomedex used to be great at this. But we’ve still got Open Source Bridge, OSCON, Cascade Ruby Conf, SOBCon… the list goes on and on. And these are all great opportunities to get folks together.

Seek out opportunities for long-term cross pollination: I’ve been a proponent of Portland startups applying to TechStars Seattle. Not only because it’s part of the best incubator/accelerator network in the United States, if not the world, but also because it’s a great way to get more Portland and Seattle people sharing ideas and working side-by-side. Now we’ve started PIE down in Portland [Full disclosure: I work for PIE.] hoping to offer a similar opportunity for Seattle startups to come spend a few months in Portland. But these accelerators aren’t the only opportunity. Portland talent should be working with Seattle talent on any number of startups, projects, and opportunities.

And now we come to the part of the post where I make my “If I’m elected class president” suggestion. One that I think could really change how our two towns work and collaborate with one another.

I tend to think there’s one thing that causes more consternation than it should: the commute between Seattle and Portland. We’re just close enough to make it a pain. SFO? NYC? Chicago? No problem. A plane is the only reasonable option. But Portland to Seattle? Well, do we take the plane, the car, or the train? What if we eliminated that question? 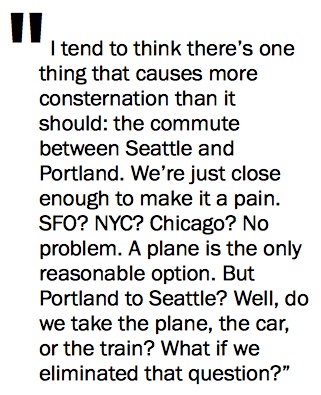 Better commuting options: In order to facilitate more collaboration between our towns, we need an easier solution for a commute. The most reasonable answer? The train. There’s a great route between Seattle and Portland that has wifi the whole way. And it’s a really nice trip if you just want to stare out the window. Or have a rolling meeting. But it has one big problem: the travel times. If we could add a later route, we’d be in business.

And if the train isn’t an option? What about a shuttle? Something train-esque that had someone else doing the driving while you worked? This wouldn’t have to be a constant thing. It could be an “as needed” sort of thing. And hopefully, that as needed thing would become more and more of a regular thing.

Another option? Startup fares. We should find some way to get one of our local airline—Alaska or SeaPort—to provide a low cost fare specifically for startups. This would make the air travel decision a no brainer.

Let’s try to make some of this happen

Even if we can’t manage to twist Amtrak or the airlines to our will, we can still work on some of the other things above. And we should. Because Seattle and Portland will both be better for it.

Got some more ideas about what we could do to make this happen? I’d love to hear them. And I’m sure the Geekwire guys would, too.

Rick Turoczy is the editor of Silicon Florist, which covers Portland startups in Web, mobile, and open source. He’s also the co-founder of PIE, a startup accelerator which brings startups together with major brands like Target, Coca-Cola, and Nike, in collaboration with advertising agency Wieden+Kennedy. Applications for PIE close Aug. 1. If you’d like to be his BFF, please follow him on Twitter @turoczy