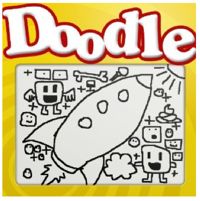 The Kindle just isn’t about reading anymore. Now, you can use it for sketching thanks to a new app developed by some creative weekend warriors most of whom hold day jobs at Microsoft. The app is called Doodle, and it essentially turns your Kindle into a modern day Etch a Sketch.

Scott Weiss, Alex Weinstein and six other developers and designers who operate the Seattle area startup 16 Hands built the app in a weekend, though it took a bit longer to work out some kinks and get accepted by Amazon.

Weinstein said that they created the app as an experiment as part of the Amazon Kindle Development program, an effort in which Amazon is assisting a few developers to build apps especially for the reading device.

“As you know, the Kindle device is really special-purpose due to eInk,” says Weinstein. “The kinds of apps that fit nicely with Kindle usage patterns are significantly different than those that fit well with iPhone/Android. Kindle created a unique niche.”

So far, reviews of the app — which costs 99 cents — have been overwhelmingly positive. The app works in conjunction with the Kindle’s 5-way controller or keyboard, allowing artists to doodle to their hearts content.

In case you’re not sure what to draw, the app also comes with drawings of a swan, the Mona Lisa, a mouse and the Seattle skyline.

The only challenge with Doodle might be prying away the Kindle from your artistic kids.

Of course, there are plenty of line-drawing apps for the iPhone and iPad, including an Etch a Sketch doodling app. But this is the very first we’ve seen on the Kindle.

16 Hands — described by Weinstein as an experiment rather than a full-fledged company — is currently working on other apps for the Kindle.