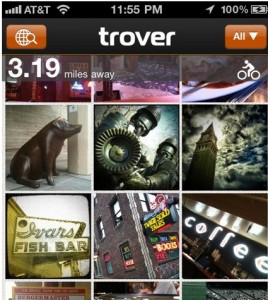 Rich Barton may be best known for Zillow or Expedia. But the 44-year-old entrepreneur-turned-venture capitalist has a few other things up his sleeve. And one of those is officially launching today.

Trover, as the Seattle upstart is known, describes itself as a “mobile discovery network.” What’s that?

Essentially, it is a free mobile application that allows individuals to share photos of places they’ve been. That could be the Burgermaster on Aurora Avenue or the Eiffel Tower in Paris.

In essence, the goal is to share “life’s hidden gems” with friends and other “Trovers,” a play on the word explorers.

As a frequent traveler, Barton, said that Trover developed from a selfish need to have “a personal guide to the world” that included recommendations from friends and other travelers.

“As explorers, we wanted to be able to capture our own discoveries, mark them for future use for ourselves, or really so that when our friends come by it is like leaving these little magic bread crumbs or sign posts,” said Barton, who co-founded Trover with his brother-in-law, Jason Karas, and former Expedia vice president of technology Andrew Coldham.

Of course, there’s no shortage of photo sharing applications on the market, notably Instagram and Color. And the intensely competitive market is one of the reasons why another Seattle upstart, PhotoRocket, just fell on tough times and chopped its staff.

Trover has plenty of cash in the bank, although the money came in a bit of an unusual fashion. The startup is the beneficiary of the capital raised by another Seattle area startup, TravelPost.

The online travel company — despite having raised $9.8 million from General Catalyst Partners, Ignition Partners and Benchmark Capital — didn’t take off as planned. As a result, TravelPost transferred the bulk of its funds to Trover.

So far, that bet is paying off. In a limited trial over the past few months, Trover attracted more than 70,000 users in 150 countries A recent look at the Trover stream of content shows that diversity, with photos posted of a rib eye steak from Delmonico’s in Las Vegas; Big Ben in London; and Taal Lake in the Philippines.

Karas, who is serving as CEO of Trover, said that the service is designed so that users can “serendipitously browse” what’s going on in a neighborhood, city or country with recommendations from friends. That’s different from services such as Yelp or CitySearch where individuals are typically looking for very specific types of businesses, oftentimes getting reviews from people you don’t know.

Like other social networking services, you can follow specific individuals and view their discoveries. You can also thank those 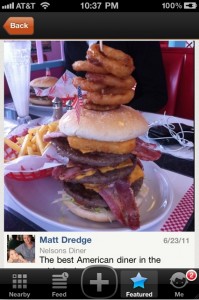 Karas, for example, lists 82 discoveries, ranging from the whiskey menu at St. Andrews Pub in Seattle to beach views at Torrey Pines State Park near San Diego. Each of those discoveries is anchored by a personal photo, creating a visually appealing (and somewhat voyeuristic) aspect to the service.

Interestingly, Barton’s backing of Trover isn’t his only recent foray into mobile. He’s also a backer of Seattle startup Zapd, which incorporates mobile photo sharing as well. But Barton said that Trover is different because it is creating a “large treasure trove of discoveries” whereas Zapd is really a Web site publishing platform for everything from travel experiences to selling your motorcycle to small business Web sites.

In its early stages, Trover is not yet attempting to drive revenue. Karas says that the first goal is to refine the service and grow the community “like crazy.”

“If we achieve that scale and people are using Trover to find things to see and do, there are a couple of different ways to monetize it,” said Karas, adding that a daily deal component along the lines of Groupon or LivingSocial is one potential concept.

Barton, for one, said that the service is already resonating.

“It is a fascinating way to zip around the world, even if you are arm chair traveling,” said Barton.

At this time, Trover is available as an iPhone download and Web site. The company plans to release an Android version later this summer, expanding into iPad and other mobile platforms in the coming months.