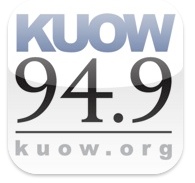 Here’s why: Frequently I’ll catch the end of a segment or show in my car and want to hear the whole thing on my phone, via my car’s auxiliary jack. Oftentimes that means navigating to the station’s webpage on the mobile browser, finding the particular program, clicking on the audio link … after pulling over to the side of the road, of course. (Hello, Seattle PD!)

Mobile apps are one solution to streamline this process, and public radio station KUOW-FM in Seattle recently released its own KUOW News apps for both Android and iPhone. KUOW’s Conversation program tweeted about the apps this morning, asking its followers for feedback on the app, so I took the opportunity to load the apps up on both Android and iPhone and give them a whirl.

They’re a step in the right direction, for sure. Features include quick access to the live stream of KUOW and KUOW2, and of course a link to pledge to the station. But what I’m most interested in, based on the scenario above, is the  built-in “news” feed (a bit of a misnomer) that provides access to the archives of recently aired KUOW segments. 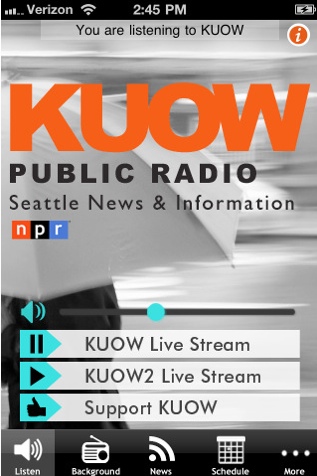 Based on my initial usage, it’s a step in the right direction, and definitely easier than relying solely on the mobile browser.

listen to a program, users first click on the segment name, but instead of just launching right into the audio, the app loads the mobile webpage for that segment — and if there’s a photo on the page, the listen button ends up being “below the fold” on the page, requiring the user to search for it.

I’m hoping that the next version of the app either links directly to the audio from the program list, or moves the listen button up on the page by default, similar to the NPR News app.

The integration with the mobile web content feels a little more seamless in the iPhone app than in Android, but in general the two are pretty comparable.

Overall it’s worth checking out. Download the free app for iPhone or Android to give it a try.

No native Windows Phone app yet, but on this page the station offers tips for streaming on the Microsoft-powered devices.