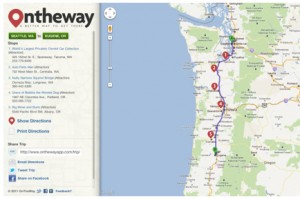 Perhaps no Seattle startup has devoted as many hours to Startup Weekend as TeachStreet. Business development guru Joseph Sunga and crew took home top honors at one of the 54-hour coding marathons back in May, and CEO Dave Schappell was instrumental in organizing Startup Weekend EDU at the University of Washington in October.

Now, the TeachStreet team has really “caught the bug” — using methods and lessons learned from Startup Weekend for what they described as their very own “in-house lab hackathon.”

The idea, as explained by Schappell, was to build a new Web service in a short amount of time that wasn’t related at all to TeachStreet’s online teacher directory.

The result? A new service called On The Way that’s designed to showcase fun and interesting landmarks, restaurants and other attractions that folks encounter on road trips.

Our family loves road trips, so with On The Way, you can plug in two destinations and see what cool things are on the route.

For example, on a road trip from Seattle to Spokane you’ll see markers on the online map for the Twin Peaks Diner in North Bend (which I believe is now called Twede’s);  the nuclear B reactor at Hanford; and the Gingko Petrified Forest hiking trail near Vantage. For a road trip from Seattle to Portland, you can discover the world’s largest egg near Winlock and the coffee pot coffee house near Auburn.

“In the future, we could see more local applications — similar to HotList, or the many other apps like it of late — telling you what’s fun and interesting near you,” said Schappell.

As part of the effort, Schappell said that the TeachStreet team was able to test out new skills, including Foursquare integration and some new mapping development work.

In the end, Schappell said the experiment was a great culture builder at the company. But TeachStreet won’t be changing its business.

“I doubt that we’ll take it any farther any time soon. We have too many other things on our plate,” he said.