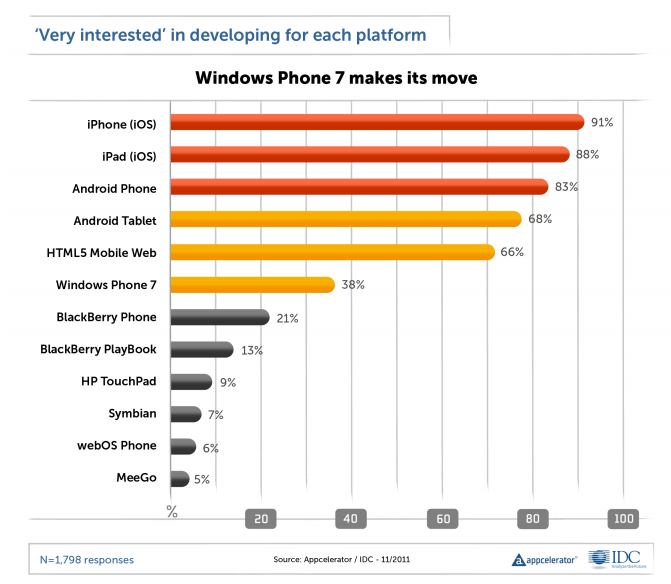 Software developers are becoming more interested in building mobile apps for Windows Phone, particularly in Europe and Asia, where Microsoft’s partnership with Nokia has been generating new attention for Windows Phone as a development platform. 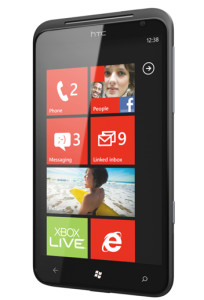 That’s one of the findings from a newly released survey of app developers by Appcelerator and the IDC research firm. Thirty-eight percent of the developers surveyed said they were very interested in making apps for Windows Phone, up from 30 percent in June.

Microsoft’s status still pales in comparison to the iPhone, in which 91 percent of surveyed developers say they’re very interested. See the full breakdown in the chart above.

Research in Motion’s BlackBerry phone platform, which had been neck-and-neck with Windows Phone, slipped to 21 percent of app developers saying they’re very interested in the platform. BlackBerry suffered a high-profile outage last month.

The percentage of developers “very interested” in Windows Phone was 42 percent in Europe, 38 percent in Asia, and 31 percent in North America.

“Nokia is seeing a resurgence in its opportunity as it launches its Lumia Windows Phone 7 devices,” the researchers say. “Twenty-eight percent of global developers and businesses, and more so in Europe, are very interested in building for the Lumia. Note that this level is more than double the level of interest in Symbian or MeeGo since Appcelerator and IDC started tracking last year.”