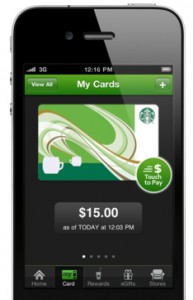 Starbucks customers are increasingly paying for their coffee drinks and snacks with their mobile phones. The Seattle coffee retailer said today that it has processed some 26 million mobile transactions since launching the mobile payment service in January.

And the buzz appears to be growing. Adam Brotman, senior vice president and general manager of digital ventures at Starbucks, said that they processed six million mobile transactions during the nine-week period ended November 30th. That compared to three million transactions during the first nine weeks of the program earlier this year.

Users of the Starbucks’ iPhone and Android apps (sorry, no Windows Phone yet) load cash onto their phones and then pay by scanning the device at retail locations. In essence, the mobile apps can serve as a replacement of plastic gift cards.

For the fiscal year ended September 30th, Brotman said that customers loaded over $2.4 billion onto gift cards. Of that amount, more than $110 million was loaded via the mobile apps.

“Even less than a year in, we are seeing significant adoption of the mobile apps for doing everyday transactions, not just payment but reload,” said Brotman. He added that a number of customers also have begun to take advantage of a new eGifting feature in the apps,  which allows customers to send an electronic gift card to a friend, family member or co-worker.

Based on the success, Brotman said that the company plans to roll out mobile payment to 700 store locations in the United Kingdom in January. It also just recently expanded the program in Canada.

“There are a lot of factors in mobile ordering that are not just about the technology, but also about the operations,” Brotman tells GeekWire. “It is something that our customers have asked us for, so we talk about it every day.”

I’ve used the Starbucks’ mobile payment feature a few times in the past. Have you? If so, did you find it easier to use than cash or a plastic gift card?