The observation deck of Seattle’s Space Needle offers sweeping views of the city and region. But for the 50th anniversary of the Seattle landmark, organizers are thinking much bigger — and higher. 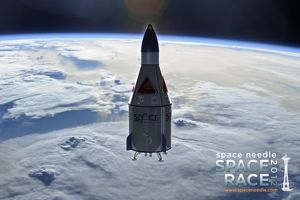 The Space Needle this morning announced an elaborate sweepstakes and competition that will ultimately send one lucky winner on a suborbital spaceflight, through the Space Adventures space tourism company.

Anyone can enter the sweepstakes for a chance to become one of 1,000 people eligible to compete for the grand prize.

“The Space Needle was built when our country was in a global space race,” says Ron Sevart, president of the Space Needle LLC, in a news release. “With space travel moving to the private sector, a new race has begun that focuses on the best of what the Space Needle has become a symbol of the aspirations of today’s world of technology and science. What better way than sending a person from our midst into space to mark our first 50 years and look into the exciting future that lies ahead.”

The sweepstakes will award other prizes along the way. After the 1,000 people are chosen at random for a chance at the grand prize, it turns into a competition that will require contestants to submit short videos and participate in challenges, with the public narrowing down the field and a panel making the final decision.

The winner will be announced in April 2012, coinciding with the 50th anniversary of the Space Needle, according to this KING-5 report.