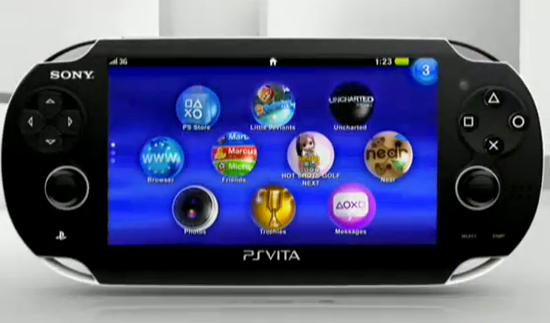 Sony this evening unveiled the official name for the successor to its PlayStation Portable. Dubbed the PlayStation Vita, the new handheld will launch later this year, with a WiFi version retailing for $249 and the 3G model going for $299.

The company made the announcement at the E3 video-game convention in Los Angeles. There were audible groans from the crowd on the webcast when Sony announced that the wireless carrier for the device in the U.S. would be AT&T. The carrier has struggled to keep up with the demands of the iPhone users on its network, hurting its reputation.

The PS Vita — the name is Latin for “life,” — represents Sony’s attempt to stay competitive with the Nintendo DS (and the new 3DS) and remain relevant at a time when handheld gaming is booming on mobile phones. In addition to a touch screen and controls on the front, the device comes with a unique twist — a touchpad on the rear.

In other notes, the company unveiled plans for a new installment in the “Sly Cooper” series from Bellevue-based Sucker Punch Productions, which has been focused for the past few years on its inFAMOUS games, the second of which launches this week.

Jack Tretton, the Sony Computer Entertainment America president, began the briefing by apologizing on stage for the recent PlayStation Network outage, which was caused by an online attack.

Nintendo will be next to take the stage at the video-game show, tomorrow morning. The company is expected to unveil the successor to the Wii at its E3 event. Stay tuned for more coverage.