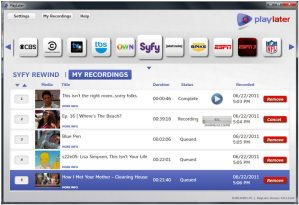 MediaMall Technologies has begun testing a new service called PlayLater, which it is touting as the world’s first digital video recorder for online video. The company, with offices in Seattle and New York, says that the service is designed to allow users to record TV shows, movies and sporting events from various online channels such as YouTube, National Geographic, MTV and The Cartoon Network.

“Tell PlayLater which shows you want to record, and just like your home DVR, PlayLater will record it and let you watch when it’s convenient for you,” the company writes in a promotion of the new service. “You can queue up a bunch of shows or movies to record, so you never run out of new content to watch.”

When used in conjunction with the company’s PlayOn software, the company said that the recorded programming can be watched on an iPad, iPhone or other mobile device. PlayOn is designed to allow people to watch TV shows and movies from Hulu, YouTube, Netflix and other services on TVs, streaming content from Windows PCs directly to consoles such as the Wii, PlayStation 3 and Xbox 360.

In the past, PlayOn has been touted as a way for people to cut ties to cable providers.

The PlayLater service is only available at this time in a closed test for 5,000 users. The company, with 20 employees, plans to charge $4.99 per month or $49.99 per year for the service.

PlayLater has no official agreements with content providers, but has the same idea as a DVR– people have paid for the content and deserve the ability to place or time shift it,” said a company spokeswoman. “Plus, the video is encrypted far beyond what the actual content providers can legally do, so the content is protected to the person that has downloaded it.”

Here are a few screen grabs of the service: 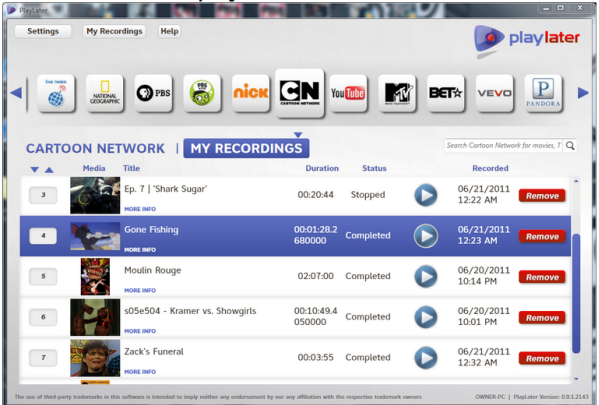 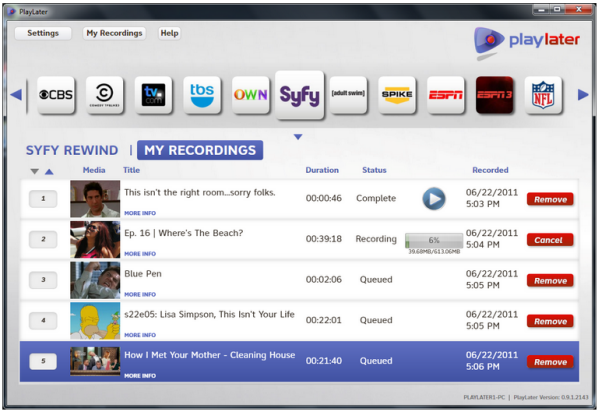