The Bible is the best-selling book of all time. But it hasn’t changed much since the advent of the printing press. Colin Wong is hoping to change that with the introduction of ooBible, a new digital Bible website designed to transform the reading of the scripture into a new type of social media experience. 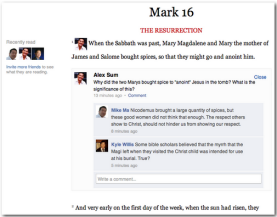 Colin Wong, a 39-year-old former Google engineer, said he came up with the idea last October after reading the Bible and discovering that many rival technologies were stuck in a 1990s-style design and not really built for the e-reading generation.

“We wanted a clean, simple interface, something that people can come in, and really just focus on the words,” Wong tells GeekWire. “We wanted to create an experience that mimics physical books, so you can highlight, annotate on it … and bridge the gap between physical books and the e-book world.”

Wong isn’t limiting his scope to the Bible, with plans to create what he calls “e-books on steroids” for other popular titles. He also sees opportunity around textbooks. But the Bible makes sense from a market perspective in part because people routinely pick-up a copy throughout their lives.

“It is really perfect for collaboration and sharing,” said Wong. “You can imagine a pastor sharing notes with their congregation or doing a Bible study with a group of friends.”

There’s certainly no shortage of digital copies of the Bible available today (A search of the Kindle store returns 14,030 titles).

But Wong said ooBible stands out from eBooks on the Kindle because it allows users to peruse multiple versions of the Bible, say The King James Version or New Living Translation or New International Version. Users also can keep their notes in one place, and the 4-person team is working hard on mobile versions for the iPad, iPhone and Android devices.

ooBible’s biggest potential competitor is BibleGateway, which was started in 1993 by a student at Calvin College in Michigan and is largely supported by advertising.

ooBible also will showcase online advertisements, but not the traditional banner variety. Instead, it plans to incorporate “commentaries” from leading theologians, pastors or others around selected passages. It also plans to offer additional content, including maps, charts and timelines, in a package for an annual fee.

Wong, who worked at Google from 2002 to 2006, believes that books will eventually transform into full-featured applications with more immersive experiences.

“We don’t believe that eBooks are going to be the final end-point,” he said. “It is somewhat restrictive, and the biggest problem with eBooks is that any technology that you adopt really has to be applied to the lowest common denominator.”

There’s a decent amount of competition in arena of turning books into full-fledged apps, including San Francisco’s Rethink Books. That’s one of the reasons why Wong decided to start in the niche around the Bible, noting that there’s no better book to create a “shared reading experience.”

A full launch of ooBible, including mobile versions, is slated for this fall. Here’s a look at a video of the ooBible in action.