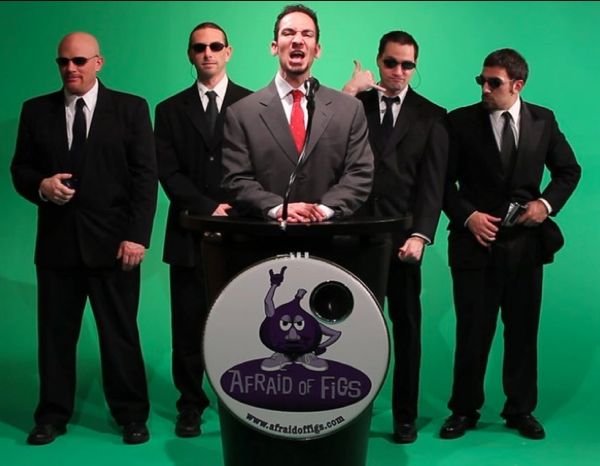 Afraid of Figs describes itself as Seattle’s “most most prominent dried fruit related geek rock band.” That seemed like a natural fit for GeekWire, so we had to learn more from this Devo and Weezer-inspired quintet which is planning its big CD release party on April 2nd at Chop Suey.

Saxophonist Chris Bloomquist happens to be the only geek in the bunch, working as a technical recruiting manager at AltaSourceGroup in Kirkland. (Other members of the band include a painter, a merchandise sales manager, a warehouse supervisor and a barista).

Also, the group’s latest song — (Don’t Wanna Be Your) Facebook Friend — takes a bit of an anti-technology (or at least anti-Facebook) bent. (Lyrics below or you can listen here).

Afraid of Figs was a finalist for the WTIA/Xconomy Battle of the Bands in 2009. And Bloomquist notes that the band — like almost every other band on the planet these days — is using social media tools to tell its story and connect with fans.

“You can’t just be good anymore you have to be tech savvy,” he says.

Got to say, the lyrics to the song are pretty funny. I wonder what Ari Steinberg of Facebook Seattle would think?

Here are the lyrics:

I don’t wanna know what’s on your mind.

Don’t care if your kitchen has been redesigned.
And all your band’s events, I won’t attend.

Don’t wanna see your horoscope
Or hear your half-cooked anecdotes.
Don’t care for the politics that you defend.
I don’t wanna be your Facebook friend.

Don’t really dig your Farmville chores
And I’m not gonna fight in your Mafia Wars
Won’t play your games, no, I won’t condescend
I don’t wanna be your Facebook friend.