That would seem to be a tall task. But Wiener, who stepped down from Earth Class Mail in 2009, said he’s taking a page out of the “Amazon playbook” with EquaShip, leveraging the U.S. Postal Service to deliver packages for the final delivery leg.

“The aim is to allow smaller shippers to viably compete with mega-retailers offering free shipping on the majority of their orders,” said Wiener in a release. 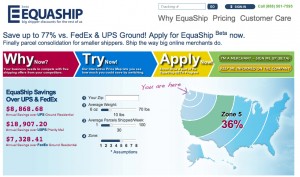 Over the past few months, the company has been integrating its system with order management platforms. Today, it now claims to be the “fourth carrier option” on the shipping screens of more than two million e-commerce sellers.

EquaShip plans to compete with the giants of the industry on price. Shippers receive anywhere from 26 percent to 77 percent savings compared to ground retail rates from the major players, according to the company.

Xconomy reports that EquaShip does not own trucks or planes, relying instead on a third-party delivery company by the name of Blue Package Deliveries.  The startup is targeting profitability by the end of this year.

In the release, Regional Mail Express Frans Nelson described EquaShip as pulling a “brilliant flank maneuver” on UPS and FedEx.

“By seamlessly integrating a network of existing carriers who already move millions of packages a week for the e-commerce giants, and funnelling in smaller shippers’ volumes in such an elegant fashion, they have effectively launched the nation’s fourth carrier without buying a single truck or airplane,” he said.

EquaShip is not the only Seattle area company looking to reduce shipping costs for small and medium-sized businesses. EnRoute Systems, a three-year-old Seattle startup, also promises package delivery at significant discounts to UPS, FedEx and DHL.