Rhapsody International, on its own now for a full year, has added more than 100,000 new subscribers over the past year, climbing to more than 750,000 — capitalizing on a monthly price reduction and the rise of mobile apps to pull out of its tailspin and boost its customer base for the first time since early 2009,  when it was still part of RealNetworks. The recovery positions the Seattle-based music service to take advantage of a predicted boom in the subscription business.

The privately held company, with 150 employees, says it has posted a profitable quarter, and it’s optimistic about continuing that pattern. Its current 60-day free trial is exceeding its expectations, and contributing to its growth as users convert into paying subscribers.

Rhapsody is witnessing a major change in the market — “a renewed ability to take your music with you, enabled by smartphones and network capability,” says Jon Irwin, the Rhapsody president.

But the download-to-own model continues to dominate the industry for now, led by Apple’s iTunes. And Rhapsody is facing tough competition from radio services such as Pandora, digital lockers such as the controversial new Amazon Cloud Drive, the potential launch of rival music streaming service Spotify in the U.S., and rumored new music initiatives from giants Apple and Google.

Irwin answered questions about that competition and Rhapsody’s strategy in an interview with GeekWire this week at the company’s downtown headquarters. Continue reading for excerpts from his comments.

Rhapsody’s new mentality: This space requires a new level of innovation and customer responsiveness. Going full circle, back to being an independent company, getting into a startup mentality, was essential to having us do that. Becoming an indie with the resources of a major.

How important was it to get to a $10 monthly subscription rate? We still have a lot of our customers that opt for a $15 price point, where you get multiple devices. But I think as an entry point, $10 is just more palatable. I would say that the stronger driver of the growth is the portability, the devices themselves becoming more and more popular. The percentage of customers in the United States with a smartphone is growing and continuing to grow.

Changing consumer attitudes about “owning” vs. subscribing to music tracks: I’m seeing it shift. It’s early in the shift. There’s greater and greater awareness of “the cloud.” As people grasp the power of that, and how it applies to music, they’ll engage. Getting that to mass-market awareness will help to continue to drive people. ‘I do own it, because I can access it anywhere I want on any device, any time I want. If I want to cache it to my device and take it with me on a plane, I can do that.’ So I really effectively own it, but I own the subscription track as part of the service. It’s taking the stigma away from what it means to rent something. For all intents and purposes, I own the music that I can listen to. I get that utility out of it. 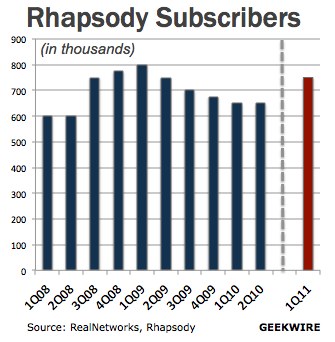 Rhapsody’s response to music locker services such as Amazon Cloud Drive: All of our music is in the cloud, it’s our library, and people can stream it and access it from everywhere. The Amazon announcement, and (predicted) Google announcement, it’s not the same experience as a subscription experience, it’s taking the music you own, and giving you access to it in the cloud. We have the ability to match that in terms of some services that we’ll be offering in the very near term. The music that you already own, and you’ve curated, populating the Rhapsody cloud with your music. So when you go the Rhapsody interface, it’s there. You’re home. Then we build on that from there. Look, Todd likes a lot of country, do you want us to fill it out, would you like to listen to the rest of your Willie Nelson albums? That’s a great starting point, because it’s an easy transition to the Rhapsody service, they’re not giving up anything.

[That example was actually eerily on target. Irwin laughed and promised he hadn’t been snooping on my Rhapsody account.]

Amazon’s dustup with the record labels over its service: One of the things, a key point that comes with the Rhapsody toolchest, is very strong label relationships, and working with the labels as partners to bring the services to market, and explore creative new business models that allow people to enjoy music and help the labels build a sustainable business, working together with them on that.

On the long-awaited U.S. launch of Spotify: Obviously they’ve had challenges predicting an entry date, and executing on an entry date, and getting the label agreements in place. Spotify entering with what might be a more radical take on the business model with aggressive label deals, sure, we’ve got to be able to respond, and deliver a better service, and continue to improve on our service so people who are Rhapsody subscribers remain, and when people look at what Spotify offers — if and when they come to the market — they see that Rhapsody offers a better product. 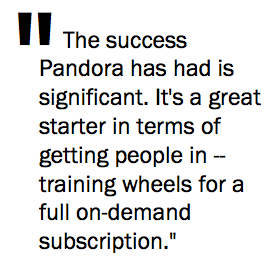 The rest of the subscription marketplace: There are a number of other startups that are out there, none of which has really gained any traction that has us quaking. I cite our growth numbers — you read the press and you would think that all of these services are coming in and they’re blowing the doors off. Yeah, they’re good products, but nobody is getting the traction. We’ve grown more in the last two months than many of these services combined have in total. There’s a feeling of market leadership that we have, and we own more than half of the U.S. market in on-demand subscriptions, and we intend to keep it that way and extend that lead.

The effect of Bob Kimball’s resignation as RealNetworks CEO. (Kimball was on the Rhapsody board, representing Real’s ongoing interest as a Rhapsody shareholder.) We’ll be working with Real to make sure we get a great replacement — somebody who can contribute to our progress and growth of the business. That’s the value of being independent, we don’t miss a beat. In fact, even though a lot of people here were once RealNetworks employees, I don’t think a lot of them even realized what was going on. Their heads are down, they’re building the Rhapsody product and experience.

Where Rhapsody is headed from there: Building on the mobile success, continuing to innovate on our mobile apps and mobile products. The second thing is a new desktop experience (currently in beta for subscribers). We code-named it “Pixies” internally, after the band — a stripped-down sound, very intuitive, a much improved experience. That is going to be the platform on which we build the concepts of synchronization with your library, prepopulate your cloud when you become a subscriber. Social elements will be built on top of this, allowing you to share the music you’re listening to with your friends, see what your friends are listening to. Those pieces will be enhanced with coming versions, along with a surfacing of radio as a lean-back experience for a lot of people. The success Pandora has had is significant. It’s a great starter in terms of getting people in — training wheels for a full on-demand subscription. So those will all be blended in.

Rhapsody’s company culture: People are working hard, people are having fun. When you start a new company you try and figure out the cultural thing. For South by Southwest, we created new business cards, and we each put different music quotes on top of them. Mine was from Neil Young, “It’s cool to go places where working people are happy.”