How are people actually using the web and mobile apps to interact with traditional television content? What’s next for the set-top box? And why isn’t Comcast supporting the Kindle Fire out of the gate?

Those are some of the topics we discussed this week with Tom Blaxland, senior director of product management for Comcast Interactive Media, who was visiting Seattle from the company’s home base in Philadelphia.

Blaxland oversees the user experience and roadmap for sites including XfinityTV.com and the Xfinity TV apps for iPad, iPhone and Android. We talked about the evolution of those apps, how viewing habits are changing, and some of the company’s upcoming rollouts, including the availability of television programming on Microsoft’s Xbox Live system.

Continue reading for edited highlights from his comments.

How people are using the Xfinity TV app on iOS: Even now that we have the ability to watch content on the iPad, still about half the use is the remote-control feature. People use it to control their TV. We’re all in the tech space, and we’ve got these crazy boxes and phones and we’re all ahead of the curve, but what we’ve found is, in reality, if you have a 55-inch TV in your living room and you have a cell phone, you’re going to use the 55-inch TV if no one else is using it.

On the need to improve on the traditional TV remote: When the remote was created, it assumed you had 10 or 15 channels. Especially with the on-demand options, in this market I think you now have 30,000 on-demand assets that you can watch at any given moment. Plus hundreds of channels. To be able to browse that with a remote is unrealistic in a classic sense. The web allows you to search, allows you to browse, allows you to filter, and narrow that down to the 10 things you might be interested in. People are managing their TV-watching time more efficiently. It sounds very business-like to say so, but it’s actually what people do now. You’ve got so many choices, and you’ve only got so many hours in the day you can devote to watching TV. 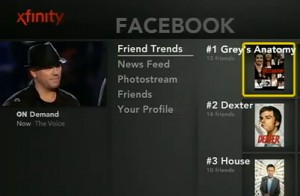 On the integration of social networking into TV: One of the things we struggled with for a couple of years was that people don’t sign in to their TVs. You sign in to Facebook, but you don’t sign into your TV. So how do you get the TV to talk to Facebook if you don’t have an ID? In some of our newest set-top boxes you can actually choose which user you are, so you can post on Facebook. With our set-top box called Xcalibur (currently in testing in Georgia) if you look at the hardware, half of it is a classic set-top box, using the same cable infrastructure and video on-demand infrastructure — which is important because that’s reliable and strong — and then the other half is basically a really nice computer with a great graphics chip in it. You can do things like Facebook, and it streams Pandora, for example. You can do quick searches. You can find your queue in that box and pick up where you left off.

On support for new devices like Kindle Fire: We don’t tend to be the first people that build something (for a new platform). We tend to be a fast follower. We’ve seen examples of people building stuff that never gets used. There’s been some great examples that I won’t mention. We really need to wait for our audience to have enough of a consensus around a specific product. That allows us to build the ones that are correct. The iPad was one that was pretty obvious. We’re really trying hard to put out an Android video-playing app for the phone. The Xfinity TV app for Android phone allows you to remote control the TV but not play video. So that’s a hole that we know we need to plug. So we’re spending a lot of time on that one, as opposed to doing these newer boxes or tablets.

Plans for future live TV on the iPad and other devices: We’ve looked very closely at how we get live TV onto these devices. There’s a few people out there doing it different ways. We realized we could probably deliver a better experience if we delivered the video through the regular cable system into the house, and then converted that into a WiFi signal. So we’ve worked with Motorola to bring out a new box. You can sit with your iPad, and your iPad controls that set-top box, which sends WiFi to your tablet, and then you can watch live TV. That’s going to come out pretty soon.

On working with alternative hardware boxes like Apple TV or Roku: If you’re Netflix or Hulu, it’s important to get on those boxes because it’s the way to get to an input on the TV. We don’t have that need, and our customers aren’t asking for it that much because they already have our box plugged into the TV. We see our mission as really improving that box, and making it a better box, extending it, and putting in all the great features that people have asked for. We don’t see the need to support those other boxes — it’s a little bit redundant. If our customers really ask for it, we’ll do it, and I think the Xbox is a great example.