I’ve advised a number of startups over the years and have been directly part of at least two. I discovered what many entrepreneurs know: it’s a maddening, exhausting, adrenaline-filled, glorious existence in which there’s never enough time, resources, sleep or toilet paper (when I was at iCopyright we brought our own).

So when I heard there would be a Startup Weekend Seattle EDU at the end of September, I was filled with admiration. And questions.

Why here? Why now? And why, of all things, education?

For the uninitiated, Startup Weekend is an international initiative, based in Seattle, that brings together entrepreneurs, designers, developers and other specialists to create startups and even launch products over the course of 54 hours. When this group focuses on a sector you care about, it’s a good thing.

Now don’t get me wrong. I’m a huge fan of introducing digital innovation to education, especially in K-12. It’s one reason I spent four years as a senior vice president at education giant Pearson (well known as school publisher of the Prentice Hall and Scott Foresman imprints) during the time many of Pearson Education’s testing and textbook businesses were transitioning from print to digital. 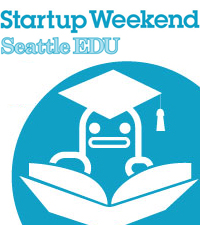 Still, it could be that the timing is perfect for a Startup Weekend Seattle EDU alongside similar efforts to use edtech and digital learning startups to spur changes in teaching and student learning, due to a convergence of internal and external forces.

As TeachStreet founder and CEO – and Startup Weekend Seattle EDU organizer – Dave Schappell notes, Startup Weekend has its roots in Seattle. Beyond that, the area has “a massive concentration of edu-innovators.” He names Vittana, LiveMocha, GlobalScholar, DreamBox Learning, Apex Learning and Giant Campus, Bettr.at and All Star Directories. There’s also Qwizdom, Headsprout, Metria and digital operations of larger companies, such as McGraw-Hill’s Center for Digital Innovation.

Yet there’s not much educational technology or digital learning industry infrastructure to support these companies in Seattle. (After a commentary I wrote early this year on Seattle’s edtech industry, I heard from two CEOs both surprised by the other education firms also headquartered here, names they only knew from national conferences.) If Startup Weekend Seattle EDU takes a small step toward connecting the pieces, it’ll be an effort that more-established local associations haven’t fully made..

Schappell adds that another critical startup ingredient is well-represented here – money. The Bill & Melinda Gates Foundation is a prominent source, and Schappell notes that Maveron and Madrona Venture Group have put their cash behind new edtech ventures.

There’s recently been a lot of edtech startup activity in the Seattle area and elsewhere, even in the hard-to-crack K-12 market. Take this year alone. A well-regarded e-newsletter focused on edtech entrepreneurship, edSurge, debuted in February. Silicon Valley incubator Imagine K12, with a specific focus on schools and direct-to-student solutions, launched in March and is accepting entrepreneur applications. The first Startup Weekend to focus solely on education was held in San Francisco in June.

Another reason the time may be right: the influence of high-profile, hard-driving foundations such as Gates. And Hewlett. And Kauffman.

Three more reasons are cited by Betsy (Elizabeth) Corcoran, a former Forbes Media editor who co-founded edSurge with the goal of bringing great technology that she saw in the private sector into education. Those reasons are: an “achingly great” need in education, including school budget shortfalls and “the anguish of teachers and parents;” the reality that most young entrepreneurs grew up with technology, they like learning, and so it seems “a natural fit;” and, importantly, that “tools for trying out ideas are just so darn good – and cheap.”

Corcoran explains, “A decade ago, it would have cost buckets of money to do what many entrepreneurs are doing with crowd-sourcing fund raising and elbow grease.”

Another key reason is the higher technology baseline. “Computer proliferation, tablets, mobile, social, broadband access and more are all reaching critical mass,” Schappell says. “And they’re doing it at a time when the cost of education is far outpacing inflation and results (vs. other developed countries) are lagging. It’s a recipe for massive innovation, and an edu-revolution.”

Why, of all things, education?

While Startup Weekend Seattle EDU will take on ideas about any level of education – including lifelong learning, continuing education and higher education – it’s the K-12 market that can really force entrepreneurs to consider a remedial course. Its labyrinthine approval processes, murky budget buckets and dominant major players often make the most intelligent outsider eventually sound like HAL at the close of 2001: A Space Odyssey.

Despite these obstacles,  it’s not just the potentially good timing that attracts new talent. “I think that education startups, in particular, usually have one advantage, and that’s the entrepreneurs often have a deep personal passion for their solution,” notes Schappell. “If you get a parent who’s trying to create a product to improve their child’s education experience, or a lifelong learner who wants to help others share their passion for learning, you intrinsically get some extremely special products.”

Edtech journalist Audrey Watters, who covered San Francisco’s Startup Weekend and will be a mentor in Seattle, suggests that entrepreneurial passion comes from teachers, too: “I was thrilled to see so many educators show up (in San Francisco), and I hope we see the same in Seattle … so they can pitch and hone ideas.” After all, many newer teachers grew up with digital technology and may see its potential to actually change teaching practice, rather than just automate existing approaches.

After the 54-hour marathon that is Startup Weekend ends, the teams that want to take their ideas further will have to trust that the factors of here and now have made it possible for their solutions to go straight through the wall that is entrenched education tradition. Or do what entrepreneurs typically do when faced with a brick barrier – go over, under and around it.