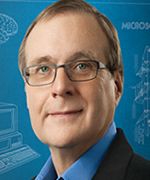 Billionaire Paul Allen has a lot of interests, from music to megayachts to mansions to mapping mouse brains. Now, can we add labor negotiator to the list?

A story by Howard Beck of The New York Times notes that talks between the NBA owners and the players’ union broke down Thursday after the Microsoft co-founder reportedly delivered a stern message to the players.

Union officials suggested that something changed during that owners meeting. According to the union, Paul Allen, the Portland Trail Blazers’ owner, was a surprise participants at the labor talks, and had been sent to deliver the owners’ message — that they would move no further.

“This meeting was hijacked,” said Jeffrey Kessler, the union’s outside counsel and its lead negotiator. “Something happened in that board of governors meeting. We were making progress.”

So, was Allen to blame for the hard line?

It is unclear whether he led the charge or was just the messenger. But you can get a sense of the negotiations from this statement from Billy Hunter of the National Basketball Players Association:

Allen, who has certainly been on the hot seat this year, following the release of his memoir Idea Man, is already getting cast as the guy who may have torpedoed the NBA season.

Take, for instance, the headline on the CBS Sports story: “Paul Allen emerges as latest lockout victim.” Sports Illustrated is a bit more sympathetic, noting that the players’ union is painting Paul Allen as “some silent assassin-style robot sent to terminate negotiations.”

Meanwhile, Willamette Week offers this advice to the world’s 57th richest man: “Paul Allen should think twice before becoming a spokesperson for the league’s poor, money-losing owners. It’s not a good look.”

Previously on GeekWire: Steve Ballmer on bringing the Sonics back to Seattle: It’s a real estate problem