“I’m a birder,” said the former Pro Bowler and Super Bowl champion who spent his last two seasons with the Seattle Seahawks.

That was one of the tidbits that Milloy shared last night at the launch of the new iPhone app Pirq, a free iPhone and Android app which displays discounts on about 180 restaurants throughout the Seattle area.

Milloy was a well chosen speaker. After all, he admits to having more than 200 apps on his phone. 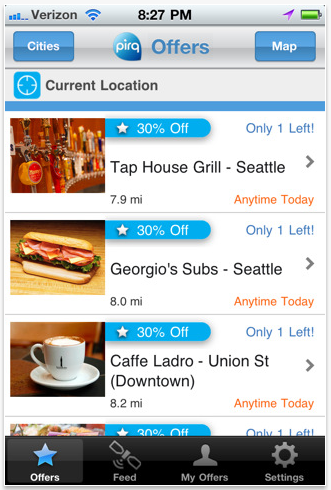 I wanted to get a better sense of what that meant so I asked to see Milloy’s iPhone after his talk. He certainly wasn’t kidding. He’s got dozens of apps organized in folders, from the Twitter app (he’s got more than 10,000 followers on Twitter) to Google Voice.

Milloy also told me that he’s looking forward to upgrading to the iPhone 5 when it comes out later this year.

In his remarks, Milloy retold the hilarious story of how he discovered Pirq, which he had forgotten that he had downloaded until he was having some “me time” at Bellevue Square.

After perusing the restaurants on the app, Milloy said he discovered a 30 percent discount to the frozen yogurt shop Red Mango.

“I had never gone to Red Mango, and I didn’t know about yogurt and all of that stuff. But I could save 30 percent, right?” Milloy said to laughs from the crowd. “It is the economy. I have three daughters and another daughter on the way. Most of my budget goes to hair … and toes. They all go to the salon, and it costs a lot of money, right? If I could save on yogurt, I am going to try this app.”

Pirq CEO James Sun also shared with the audience a new program where they will donate 10 percent of their topline revenues to United Way program’s to feed the hungry.

Previously on GeekWire: Ex-star of ‘The Apprentice’ James Sun takes on Groupon with Pirq