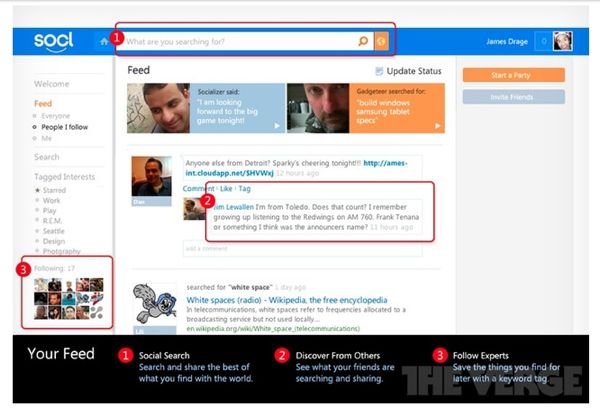 Back in July, a Microsoft splash page under the name of Socl.com mysteriously emerged. A short description on the site at the time noted that Socl would allow you to ‘Find what you need and Share what you know easier than ever.”

At the time, many speculated that the effort — operating under the code name Tulalip and described as a design project from Microsoft Research — would be the software giant’s counter to Facebook and Google+.

Now, more details are emerging via the tech site The Verge, which reports that the social networking project of the FUSE research group will eventually see the light of day in a public test.

Reporter Thomas Houston gets an inside peek at the service, pointing out that Socl “has a big hill to climb” in order to compete with the likes of Facebook and Google+. Features include the ability to tag specific search terms so friends can comment, like or tag similar content and the ability to simultaneously watch online videos with friends (sounds a bit like Google+ Hangouts and Giant Thinkwell’s Flickmob).

Ignoring for the moment that the interface looks a lot like that other social network, Socl offers a bare bones, three column layout, with basic navigation in the left rail, a social feed down the middle, and invites and video party options (more on that soon) on the right. As usual, you can follow other friends, but you won’t find any list-making tools. Core to the experience is the large search field at the top that asks, “What are you searching for?” effectively creating a new type of status update.

Public invites for Socl are about to be sent out soon, so let us know if you get one and whether Microsoft has a chance to compete in the field of social networking.

[Screen shot via The Verge].