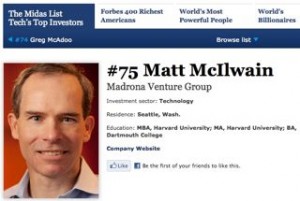 Is Madrona Venture Group’s Matt McIlwain a modern day Midas? Some people think so. The Seattle venture capitalist — an early backer of Isilon Systems and World Wide Packets — was just named to the Forbes Midas List, a prestigious ranking of the top 100 venture capitalists in the country. He was the only investor from Seattle to make the list, which was led by by Accel Partners’ Jim Breyer (think Facebook) and Sequoia Capital’s Michael Moritz (think Zappos).

I am not sure whether to celebrate McIlwain’s accomplishment or bemoan the fact that just one Seattle VC cracked the top 100. (Frazier Healthcare’s James Topper also made the list, but he’s based out of the firm’s Silicon Valley office).

Obviously, Seattle VCs have a lot of work to do in order to elevate their standings, but they are not all to blame. After all, this speaks to a bigger challenge facing Seattle: Where are the next-generation super-star companies? The Zyngas, LinkedIns and Facebooks of the Pacific Northwest?

McIlwain ranked 75th in this year’s list, down from the 57th slot in 2009. And that fall comes despite the fact that Isilon Systems — the digital storage company that McIlwain bankrolled from a seed stage investment — sold last year to EMC for a cool $2.25 billion.

The Seattle venture capitalist doesn’t always pick the sexy startups, instead bankrolling companies that provide the back-end infrastructure that makes the Internet economy hum. His other investments include ExtraHop, Skytap, Tier3 and Apptio.

UPDATE: This marks the third time that McIlwain has made the list, saying that he’s simply trying to build great companies.

“It is really a reflection of the amazing entrepreneurs that I and the Madrona team have the privilege to work with everyday and what they are doing to build innovative companies,” McIlwain tells GeekWire