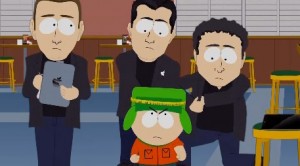 You know you’ve got a PR situation on your hands when the South Park creators get involved. Apple is no stranger to the biting wit of Trey Parker and Matt Stone, and the latest episode of South Park takes full aim at Steve Jobs and some of the recent iPhone location tracking issues.

In the South Park premiere — dubbed “HumancentiPad” — South Park’s Kyle is surprised to learn that Apple knows his whereabouts — even though he turned off the location tracking.

“You are telling me that every time you guys download an update for iTunes, you read the entire terms and conditions?” Kyle asks his buddies.

Check out the hilarious snippet here:

In another clip, the boys question whether Cartman really owns an iPad.

This is great satire, and it comes just as Apple tries to clarify it’s position on the location tracking issue. On Wednesday, Apple released a lengthy FAQ trying to clarify how it was tracking iPhone locations.

Apple said the issues are “very complex” and “are hard to communicate in a soundbite.”

But they didn’t say anything about a 90-second South Park clip.