We’ve been wondering for some time now what Rich Barton and Nick Hanauer have been cooking up at their latest startup: King of the Web. After all, Barton (the former CEO of Expedia and Zillow.com) and Hanauer (an early backer of Amazon.com and aQuantive) are two of the most successful Internet entrepreneurs in Seattle. Today, we finally got a sneak peak at their latest creation, and frankly we’re a little perplexed.

King of the Web, which launched a private beta this afternoon by posting a password on its Twitter account (“Crown” for anyone who wants in), is a new social media game which brings a new definition to Internet celebrity by anointing a monthly “King.” Say what?

Here’s a description from the company:

“King of the Web lets real people vote for real-life characters in a competition for cash, prizes, and wholly useless designations (“King of the Web”). In other words, instead of just a bunch of “likes” and “views”, here you can actually get (and give) something tangible in return for creativity, phatness, hilariousity, smartassery, whatever.

Hmm. I’ve been poking around on the site, and it’s a little confusing trying to figure out what’s going on here.

Boyer-Finch tells GeekWire that about half of the people who come to the site never bother to fill out a profile page, while the other half end up spending as much as six hours per day on it. In that regard, the startup has a bit of a Cheezburger feel to it, a comparison which Boyer-Finch welcomes.

“It is sort of a strange phenom, and either you get it or you don’t,” admits Boyer-Finch. “It is either black or white for folks.” 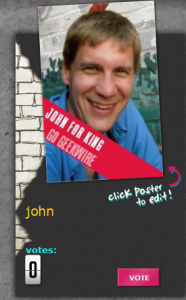 The concept here is tap everyone’s inner desire for celebrity status — even if it is within the bubble of a small community at this time. Users fill out profile pages by uploading images and video messages of themselves, encouraging other members of the community to vote for them.

Users have 30 days to campaign, with the rhetoric and stunts heating up as the clock ticks down. By that time, some users have submitted multiple videos, photos and messages as to why they should be elected.

The prize for the current election cycle is $1,000. Users can run for “micro elections” in various categories: Animal King, Fail King, Talent King and I, King.

“We’re kind of taking the rails off what it means to be entertaining and to be awesome for that matter, and just let people decide what that should be,” she said.

Boyer-Finch said she immediately fell in love with the concept when Hanauer approached her about the idea last summer.

“For me, right away, I was like: ‘I love this. I want to play this.’ We are all passionate at King of the Web about the simple fact of celebrity, and the notion of celebrity in our society has forever been changed,” she said. “Hollywood’s definition of what people love and who they love is no longer dictated by what they decide to editorialize or what they decide to put on television. It is dictated by what people do on the Web.”

Boyer-Finch said that the demographic for the game is pretty broad, since different people find different things as entertaining. But she said “we definitely have a different demographic than the … person playing FarmVille.”

I just created my profile on King of the Web, and I’ve yet to get any votes. So, I asked Boyer-Finch how I could spread the word.

“You’ve got to be awesome,” she said.

Apparently, I am not awesome enough. But Boyer-Finch said the company is still working on a request system and other strategy elements that will help people spread the word

“The main way to get votes is to just really do anything that someone would do when they are trying to entertain on the Web,” she said.

And that just leaves me wondering: Who really would have time for this?

John Cook is co-founder of GeekWire, a technology news site based in Seattle. Follow on Twitter @geekwirenews.