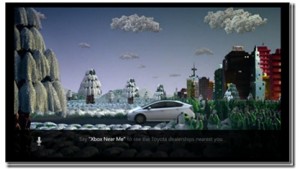 Microsoft is showing off a new online advertising technology today that one software executive says could “change television as we know it — forever.” Dubbed NUads, the offering allows users of the Kinect Xbox 360 video game system to use their voice, or hand motions, to interact with on-screen ads in much deeper ways.

For example, a user could say “Xbox More” in order to pull up more information about a car commercial appearing on the screen. Users also could say “Xbox Schedule” in order to send an alert to a calendar about an upcoming movie or show, or “Xbox Near Me” in order to find a nearby store. The service also incorporates Tweet, text and polling technologies, so the messages can be spread virally through social media channels.

The New York Times has more details on the advertising technology, with reporter Tanzina Vega noting that the ads are designed to “keep the attention of Xbox users in a way that traditional television advertising does not.”

One advertising exec calls the technology — set to debut later next year — “phenomenal.”