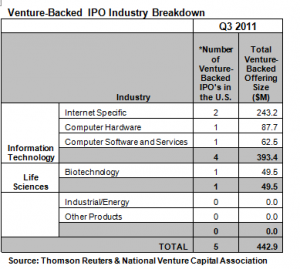 Over the course of the past week, I’ve bumped into a venture capitalist and a high-tech lawyer who shared with me nearly identical information. Basically, they said things are slowing down. And now here’s more evidence of that fact.

During the third quarter, just three venture-backed companies completed IPOs. That’s down 77 percent from the previous quarter, according to research released today by the National Venture Capital Association and Thomson Reuters.

While NVCA president Mark Heesen noted that the IPO market “screeched to a halt” in the second half of the third quarter, he expressed optimism that corporate buyers continue to gobble up startup companies. In fact, 101 venture-backed companies sold out during the quarter.

“Quality acquisitions continue to get done which should help venture capital firms return money to limited partners and better position themselves to raise new funds,” said Heesen. “However, current economic instability could reduce the number of high return acquisitions while keeping new IPOs at a seriously low level for the remainder of the year.”

One of the five venture-backed companies to get an IPO done during the quarter was Seattle-based Zillow. The online real estate company continues to trade above its $20 offering price, now trading around $27.50 per share.

The NVCA says that 64 venture-backed companies are now in registration, including Seattle’s Impinj. 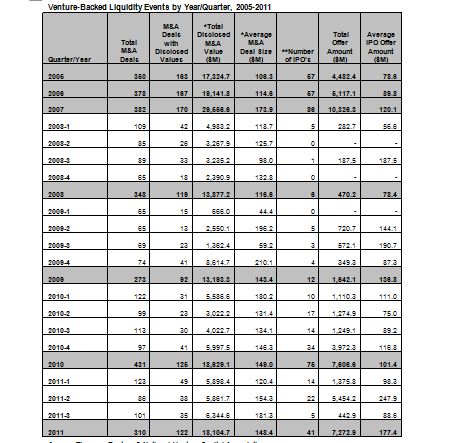