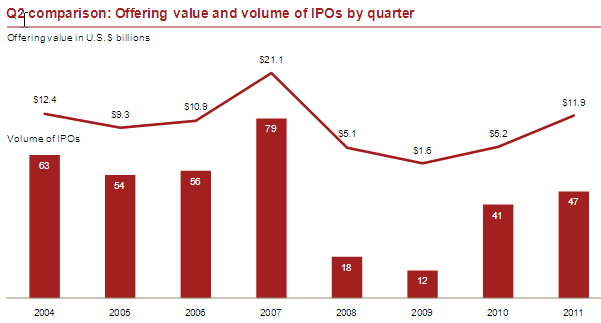 Every day it seems there’s a story of another technology company being valued at $1 billion or more. Last week, it was PopCap Games. Today, it is mobile payments startup Square and social gaming powerhouse Zynga (which reportedly is considering an IPO that could value the company at a whopping $20 billion). Driving those valuations is a public marketplace that’s awakening once again to fast-growing Internet companies. According to the U.S. IPO Watch from PwC,  initial public offering proceeds during the second quarter will top $11.9 billion. That’s a 129 percent increase from the $5.2 billion raised in the second quarter.

Technology companies, including LinkedIn, are leading the way with 11 of the 47 IPOs during the second quarter representing $4.4 billion.

“With technology representing approximately 25 percent of the companies entering the pipeline in the second quarter, technology will be a key sector in the IPO market in 2011,” said PwC’s Henri Leveque.

Seattle area tech companies such as Impinj and Zillow entered that pipeline, hoping to cash in before the IPO window closes. In fact, the IPO pipeline added a total of 77 companies during the second quarter. That was up compared to the first quarter when 52 companies filed to go public.

Once companies go public, they are doing pretty well in the markets. According to the PwC research, second-quarter IPOs saw a nine percent increase on the first day of trading and eight percent gain in the stock price a week after trading. Technology IPOs had the largest one-day returns of 16 percent.