Buying a high-quality, custom-made suit is typically something reserved for the rich and famous. But imagine if you could get that same tailored suit cut to your exact dimensions by a Chinese tailor, and then have it delivered to your doorstep in two weeks or less? That’s the promise of Indochino, a Vancouver, B.C. upstart which today is announcing a $4 million financing round led by Seattle’s Madrona Venture Group.

Indochino quite simple wants to open the door on custom menswear … to the masses. And while that may seem like a simple goal, it involves a level of complexity that the founders hope technology can help solve.

“We have essentially retooled the entire supply chain to enable rapid fire delivery of custom apparel to an average guy,” explains co-founder Kyle Vucko, adding that the company works directly with suppliers in Shanghai on each suit, shirt or pants.

But how on Earth does the company ensure that what’s ordered online and then created in Shanghai will meet the needs of the businessman in Chicago or Seattle or San Francisco? After all, one missed measurement might set off alarm bells for the fashion police.

Vucko tells GeekWire that the company spends a lot of time on data analysis of customer measurements in order to predict one’s sizing more accurately.

“As Web specialists, we have honed the ability to take measurements produced by you and a buddy and ensure a well fitting suit on the first order,” Vucko says. A tutorial walks customers through the measurement process prior to making a purchase, measuring things like neck size and sleeve length.

Indochino also offers a 100 percent “perfect fit promise.” That means a customer who is dissatisfied with the product can receive a $75 alteration credit to take the suit to his own tailor to fix the problem.

On the surface, this may seem like an unusual investment for Madrona. But the Seattle venture capital firm certainly has played around with new concepts in online retail over the years, from its early bet on Amazon.com to an investment in handbag rental service Avelle.

Scott Jacobson, who is leading the deal for Madrona, said the big idea behind Indochino is one of  “mass-customization” where consumers don’t have to shell out $2,000 or more for a high-quality suit. (Most of the suits on Indochino range from $350 to $600).

“We think they have an opportunity to be a disruptive force in online apparel,” he says. 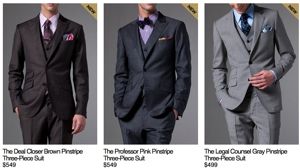 Jacobson test drove the Indochino service on a few occasions prior to the Madrona investment, buying a few shirts and suits. So, at this point, he should be one of the best-dressed men in the Pacific Northwest tech scene.

All joking aside, Indochino’s challenge appears on the surface to be one of scale. After all, the company relies on hand tailors in Asia to produce the customized clothing.

Jacobson declined to go into great detail on the behind-the-scenes operations, noting that the company is investing heavily in technology to help modernize what has historically been a manual process.

In terms of grabbing consumer market share, Jacobson said that if Indochino can deliver a great fit at a reasonable price, there’s really no reason why people would shop elsewhere.

“One of the barriers to buying clothes on the web is fit (or concern that what you buy won’t fit),” said Jacobson.  “If a brand can make clothes that fit you great every time, and all you need to do is pick the stuff you like, customize the features (if you want), and check out…that can be very sticky.”

The company already boasts about 17,000 customers, a number that Vucko is looking to boost with the new cash. Its sales topped $1 million in 2009 and grew by 245 percent last year — all on less than $1 million in capital invested.

The startup now employs 33 people between its main operations in Vancouver and Shanghai. That’s up from 10 employees at this time last year.

In addition to Madrona, Burda Digital Ventures participated in the round.

The idea for the company originally came when co-founder Heikal Gani struggled to find a suit for an important conference. After a disappointing experience at several retail stores, Gani and Vucko decided to create Indochino.

“We felt there had to be a better way to get dressed and went about designing something from the ground up that had men in mind,” said Vucko.