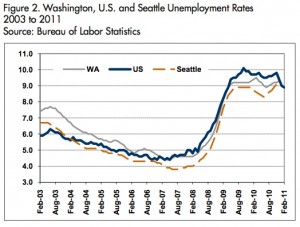 It is starting to get a little wacky on the hiring front for skilled technology workers. Silicon Valley companies such as Google, Facebook and Salesforce are on the prowl, trying to outdo one another with big salaries and other perks. Upstarts like Seattle’s SEOmoz are trying to compete as well, with the Seattle company recently offering a  $12,000 bounty for referrals that turn into hired employees. But is this hiring craze being felt in the overall economy of Washington state?

A look inside today’s unemployment report suggests maybe not. Just 800 jobs were added in the state during the month of February, enough to push the unemployment rate down to 9.1 percent. And while that’s good news, especially for an economy which has been shedding jobs over the years, it is not quite enough to make a big dent in the carnage of the past few years.

Furthermore, the information sector — where a number of technology jobs get listed — actually saw a decline in jobs last month. It was down 200 jobs for February when compared to the previous month. Software publishing, a sub sector of the information category, was essentially flat for the month. And that category saw just 500 jobs added during the 12-month period ended February 28th.

“It’s not great. It just seems to be middling along,” said Dave Wallace, chief economist for the state.

Wallace tells GeekWire that it’s especially difficult to get numbers which truly tell what’s going on in the technology industry. After all, companies such as Amazon.com — an online retailer which has been experiencing enormous growth — don’t get classified in the information category.

Even so, adding 500 jobs in the software publishing category — about 40 per month — isn’t going to make a big change in the economy.

So, where are the jobs? The construction industry added 3,900 jobs last month, while government positions increased by 1,700.

And it’s not to say that there aren’t opportunities out there in tech. Isilon Systems, recently acquired by EMC, said it plans to ramp up hiring this year with plans to nearly double its 500 person staff. Tableau Software also is on a growth tear, as are a host of smaller startups. And Amazon, which we referenced before?

You can see the full unemployment report here.