The noontime panel at Seattle Interactive Conference today featured a great lineup of musicians and others involved in the music industry for a discussion of how the digital-music era is shaking out, and what it means for them and music fans.

The panel lasted a full hour, with lots of insights from each of the panelists. Continue reading for a few of the highlights.

How things have changed for musicians

Sir Mix-A-Lot: There’s been ups and downs. The down side is, when I produce a record now — record, showing my age — when I produce a track now, I don’t think about selling music to people, I think about using that music as a giant advertisement to sell something else. It’s been good in a way … because now we’re able to monetize our content with Burger King ads and Butterfinger and so on and so forth. Ups and downs. To me, new artists have to be very aware of what publishing is worth, because that’s really the only value in your music anymore.

Nick Harmer, Death Cab for Cutie: It’s definitely easier to spread the word about your band. Using it as an advertising tool, as a marketing tool. I think there are a whole new host of challenges, dovetailing to what Mix was just saying. I spend as much time in my day thinking about music and practicing bass as I do trying to think of some novel way to tie our music to some event that’s happening online to get people to pay attention to it. … 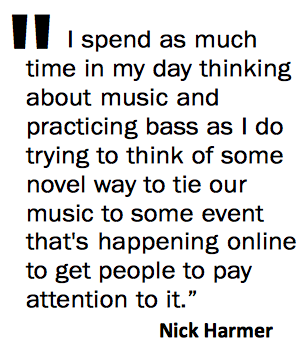 So we spend an awful lot more time thinking about ways to generate content beyond just generating music. There are a lot of great days where those things intersect perfectly and you’re really excited about some kind of synergy that happens, and then there are days when you are so frustrated, where all you want to do is hide behind the curtain again. You’re just like, people have too much access to me as a person outside of me and the band now.

How the online era has changed radio

Aaron Starkey, KEXP: It allows for a degree of connectivity to what’s happening, to what they’re listening to that you couldn’t do obviously before you had that connection. We’re member supported, so a third of our audience outside of the Seattle broadcast region supports us financially. … Why do they do that? Why do they listen to us? I think it’s because of the impact of commercial radio … it’s very homogeneous out there. That’s one thing that I think attracts people to it.

I think the other thing that attracts people to it is that we’re playing what we think people should hear. It’s curated. Sometimes you may not like the song, but you trust us enough to listen to the song that you don’t like to get to the song that you do like. And it’s that sort of trust that appeals to a certain type of individual. And our challenge from a marketing perspective is to find more of those people that don’t know that that’s what they want.

Sir Mix-A-Lot: There is still that giant Clear Channel God that wants to dictate what we listen to, and I think that’s dying. That dragon, the head’s cut off, it’s just a matter of time before it falls. But I think independent radio, and what I mean by independent is that it’s not tied to any giant entity, that type of radio is kinda what we need right now.

There’s so much shit out there right now. Sometimes I go on iTunes and I just buy songs because the title looks interesting. And then I filter it out later and I throw away $10 worth of music. It would be nice to have someone who is musically connected, but not necessarily to a company, to filter some things for us.

How music discovery has changed

Tim Bierman, Pearl Jam Ten Club: The record store guy is gone, and people aren’t actively pursuing radio like they used to, so they’ve turned to social networks, they want to see what their friends listen to. When I log in, in the morning when I get to work, the first thing I do is check music tab and see what my friends are listening to, and if there’s a band that I haven’t heard yet but I’ve heard a lot about, or I see a lot of people listening to, I’m going to go check that out right away. The ambassadors and the soldiers in the social networks are turning into the record store guy and the radio programmer from days gone by.

How online transparency has changed the music business

Sir Mix-A-Lot: The one thing I do miss is mystique. I was a big Prince fan, but I never wanted to hang out with him, you know what I mean. It’s like, what do you mean you don’t eat BBQ? … The transparency is cool. For me, it works, because I’ve always been whoever I am, but imagery still is cool. Actors can still pull it off, but we are not allowed to anymore. No, no, no. No mystique. I want to know what shoe you put on first, which leg you put on first in those pants, and it takes away from something we grew up on but this generation never saw it so they probably could give a damn.

Nick Harmer, Death Cab for Cutie:  There seems to be a lot of pressure around making something go viral, whatever that means. The best part about viral stuff that’s really great is that it’s not manufactured, that it just happens, and it’s exciting and you’re part of it. We made a fake website for our last album, and we were going to put out these weird little anonymous snippets and let someone kind of discover this thing, and literally we launched it and within like 40 minutes, some kid somewhere was like, “Oh, I found the IP address, and I traced it, and this is a whole thing for … ” and it’s over. And we hadn’t even unrolled anything yet. It was already just exposed. And we were like, oh, great, so now we have this dead website with all of this stuff that we made. So that was a crash and burn, for sure.

The hit: This album, the very first video we did for our single “You are a Tourist,” we did a live streaming video. … It was amazing to watch that side of it come together, especially on the technological side. We had mission control to be able to stream a video in HD while we were making it, so people could watch it uninterrupted around the world all at one time. The amount of information we had to get out, to let people know when to tune in, and then to actually do it, and feel people actually watching while you were doing it was beyond exciting. We really had the sense that people who were interested in this were really rooting for this to be successful, and they were on our team, and they were really happy when we stuck the landing. Maybe some people were wanting some tragedy to happen — oh, the bass player lost an arm in that video! — but we would have stuck by that, we would have said, that’s the video where the bass player loses his arm.

Ross Reynolds: That would have gone viral.